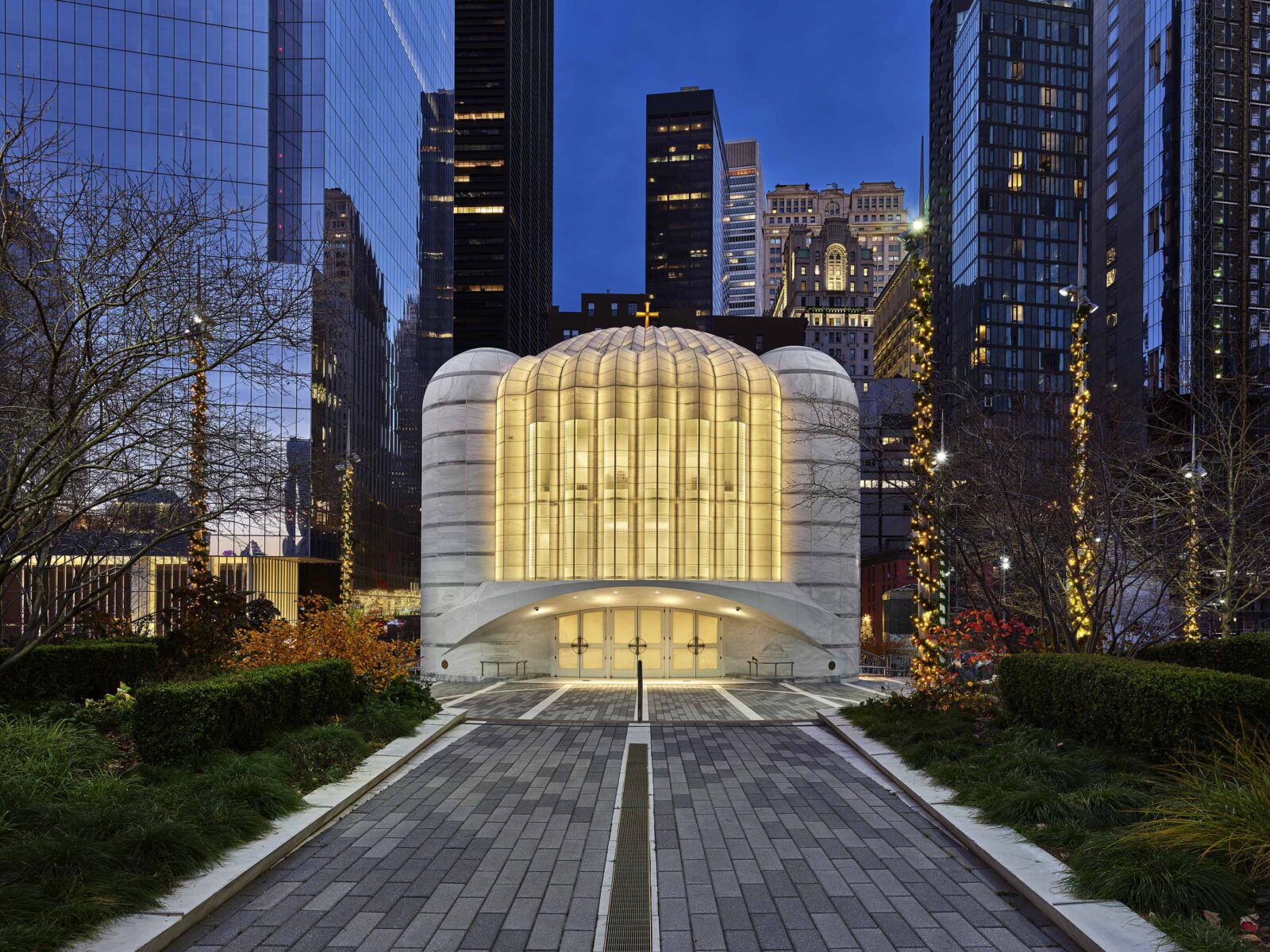 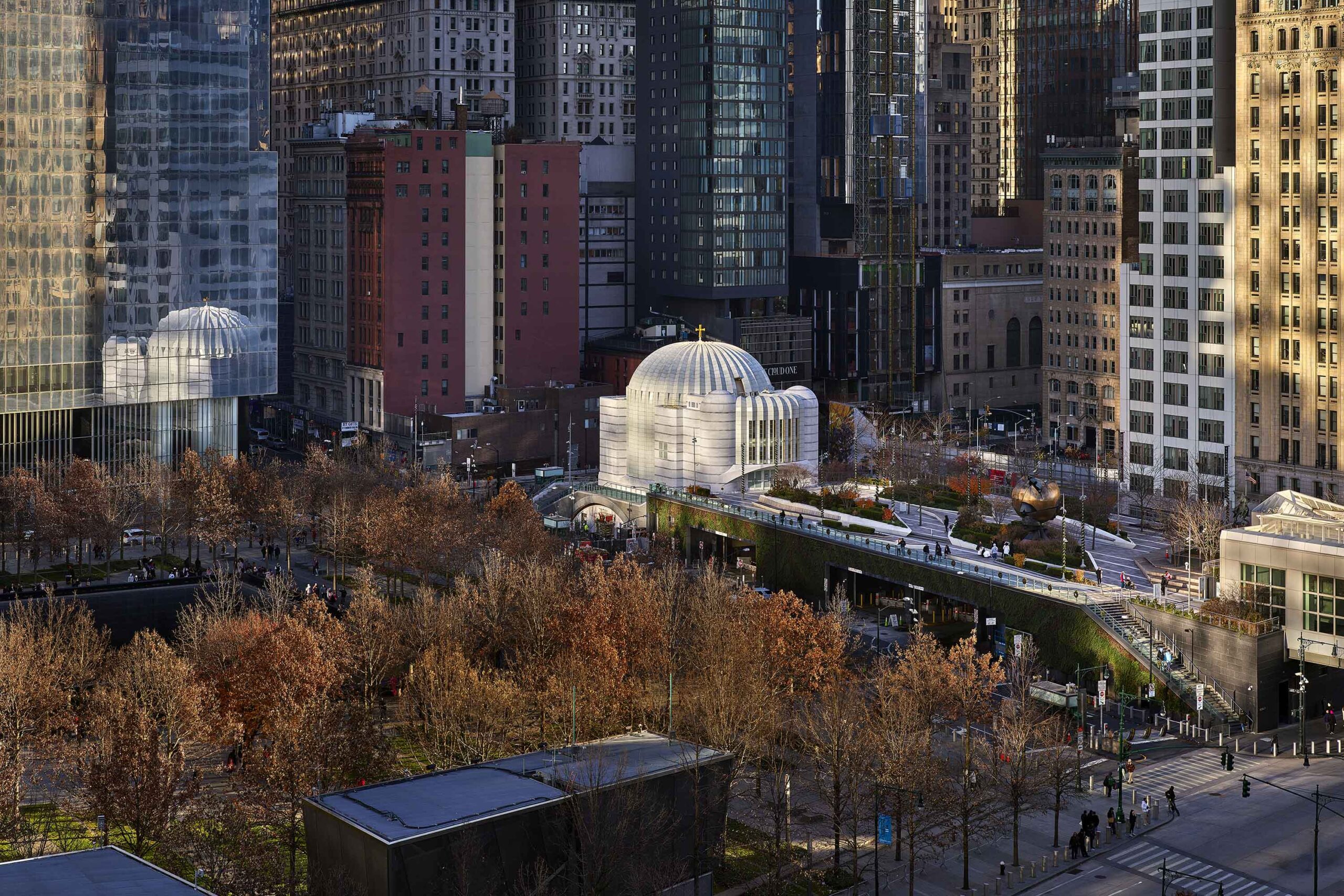 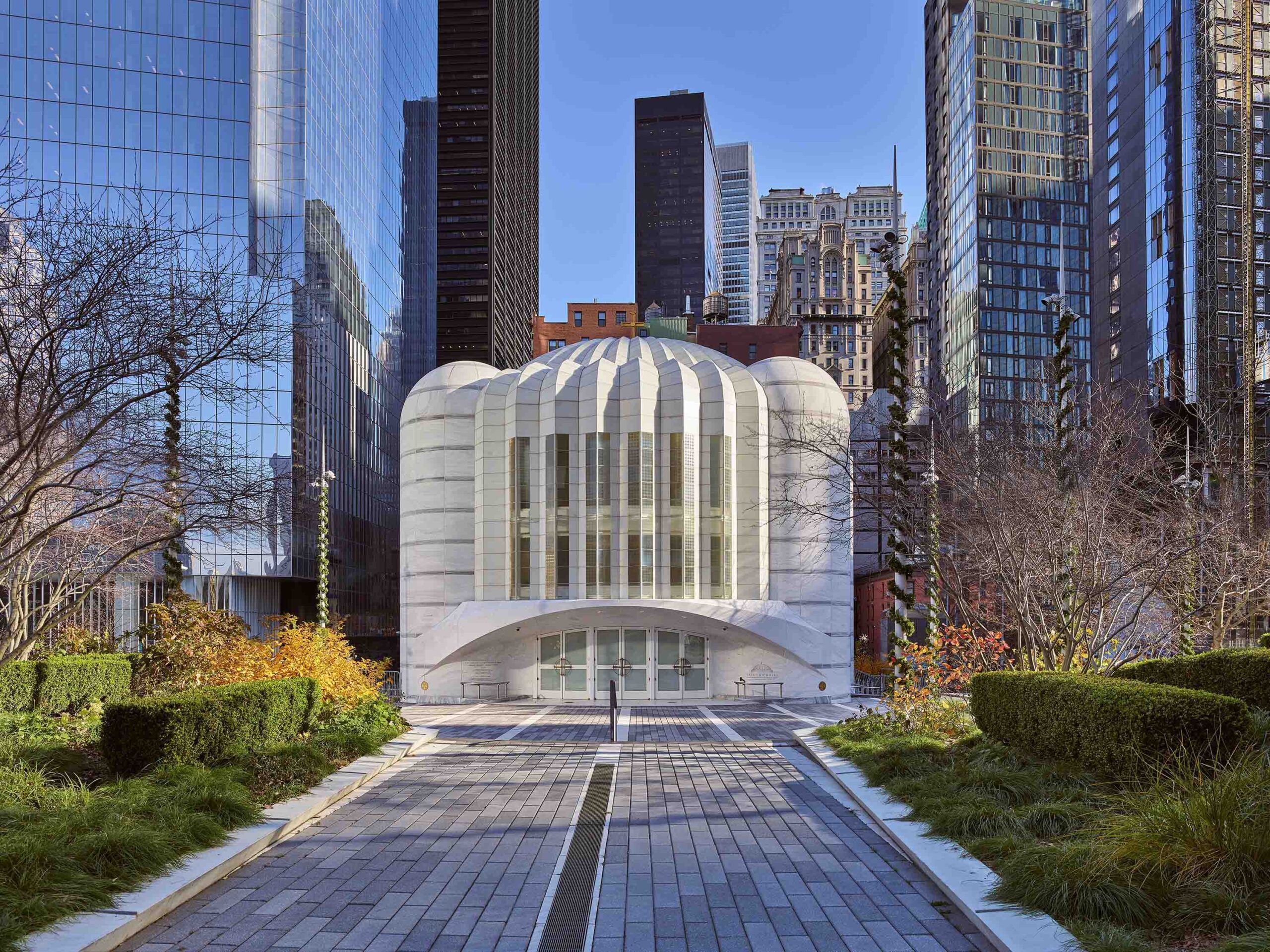 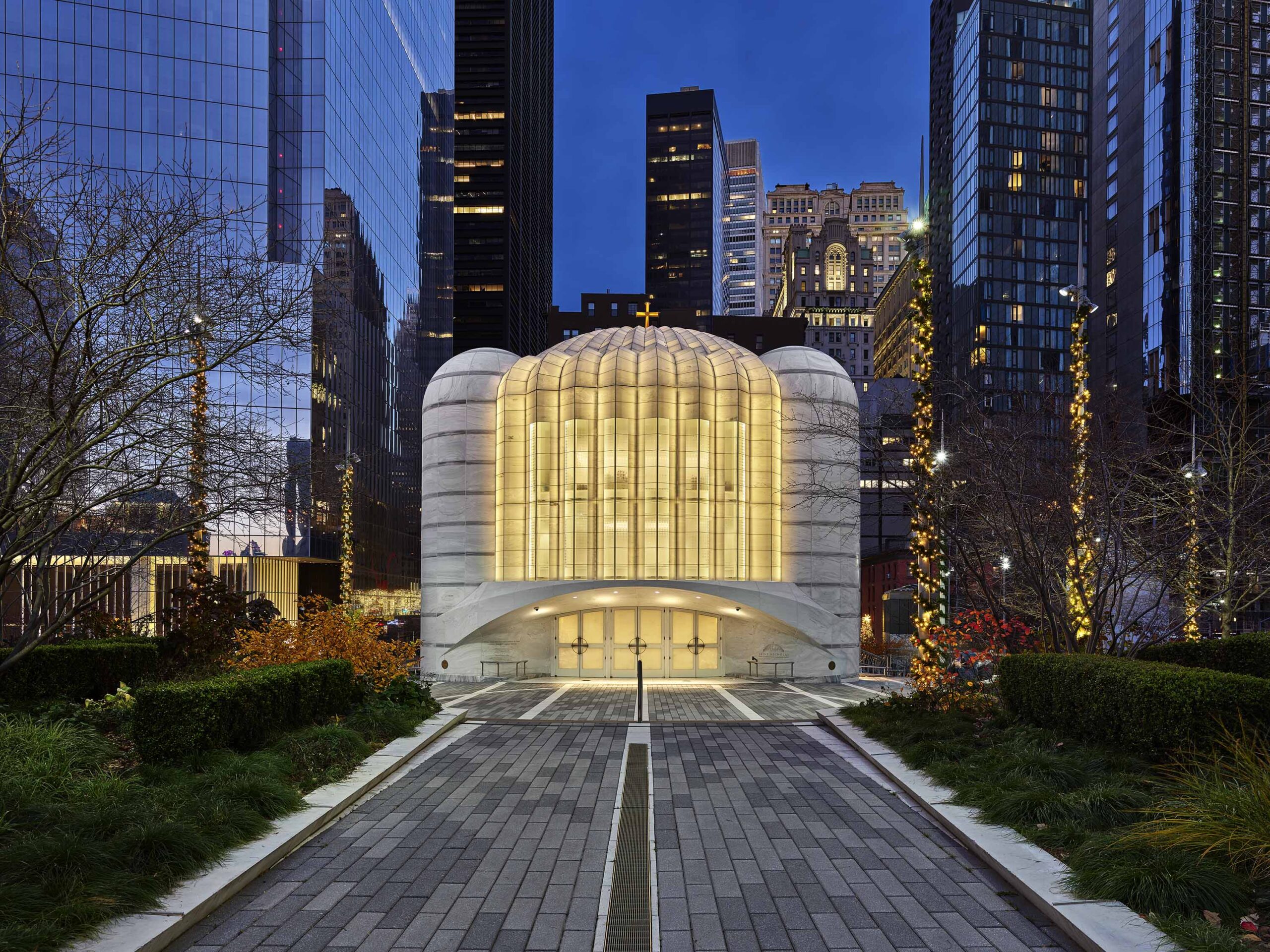 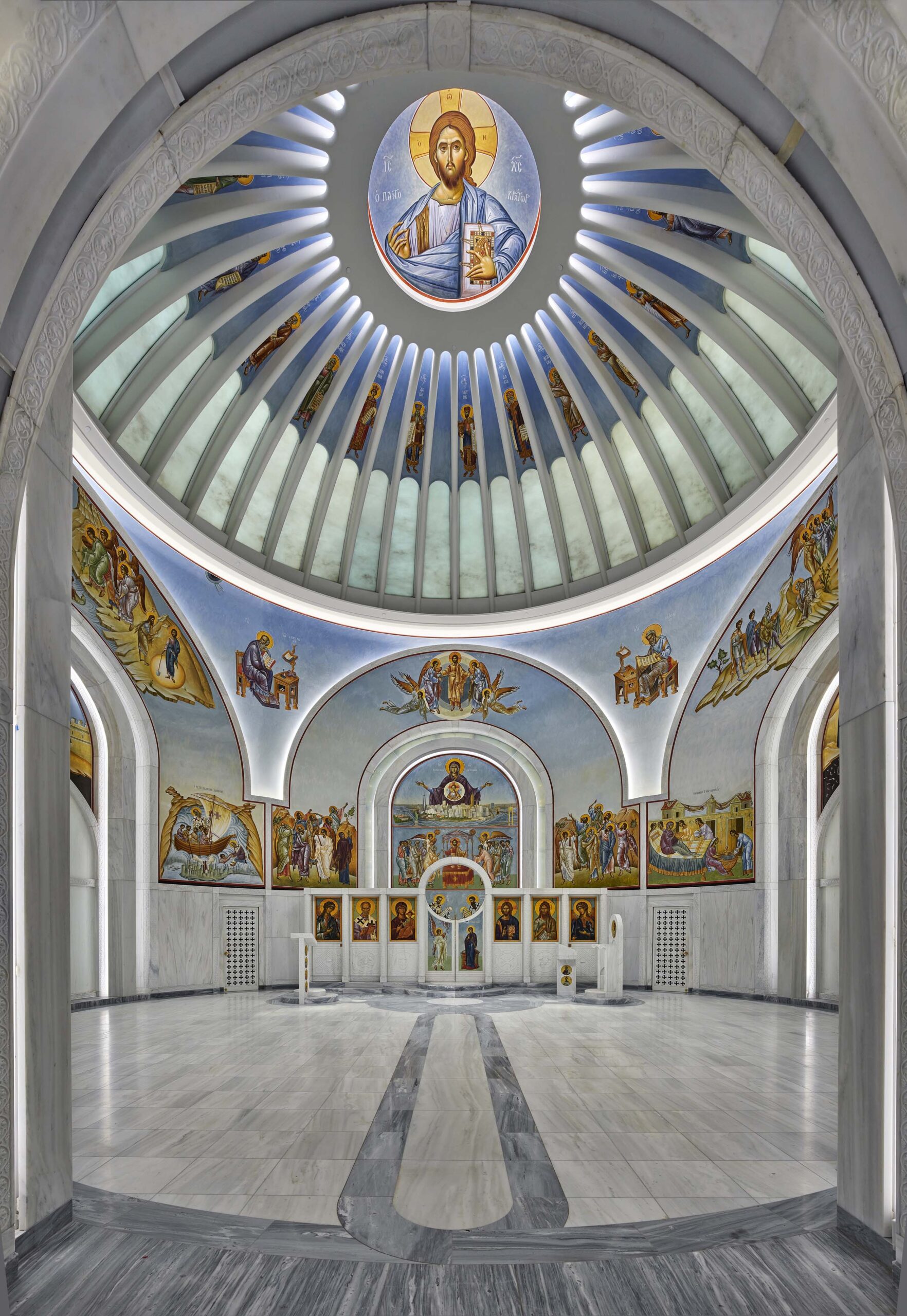 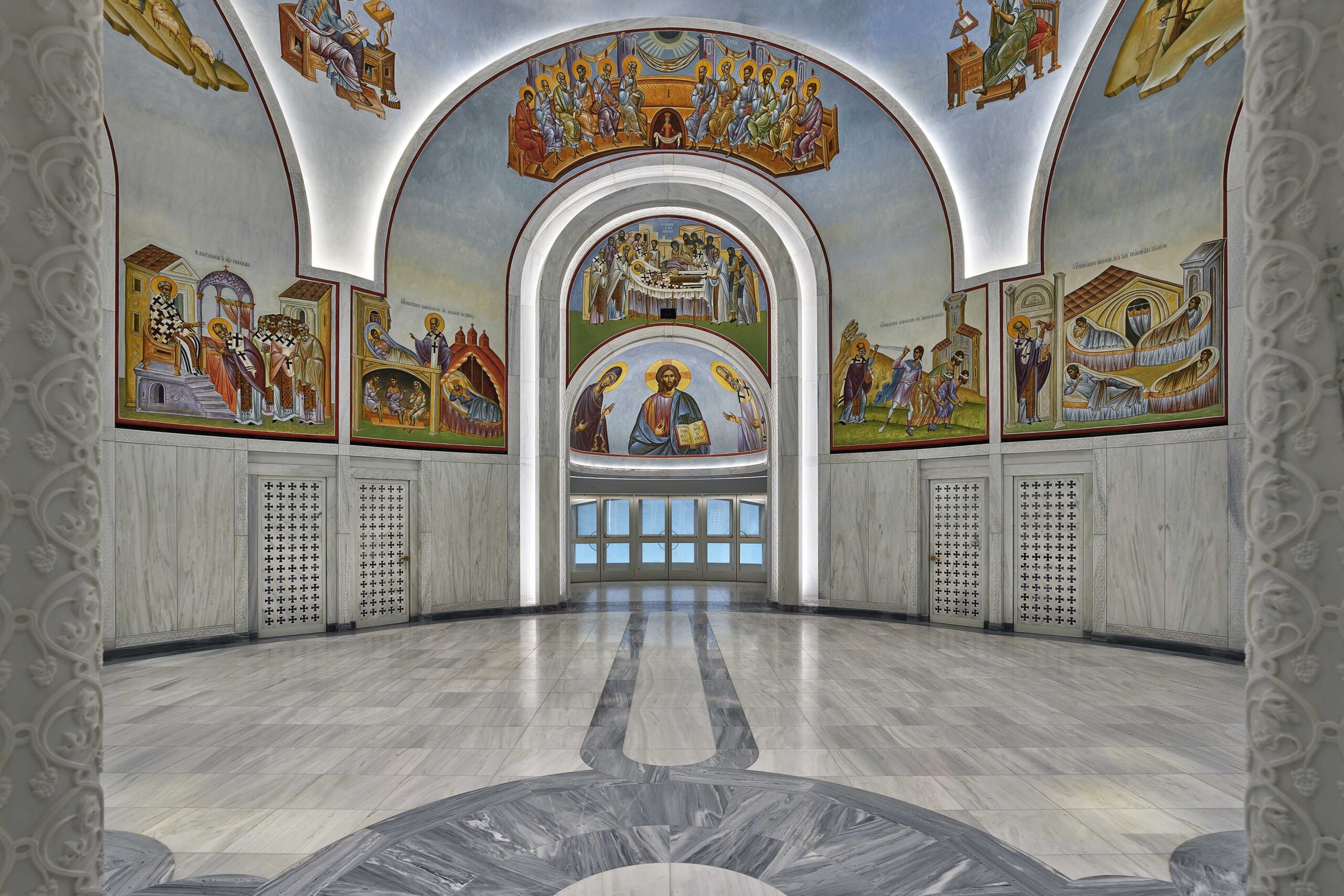 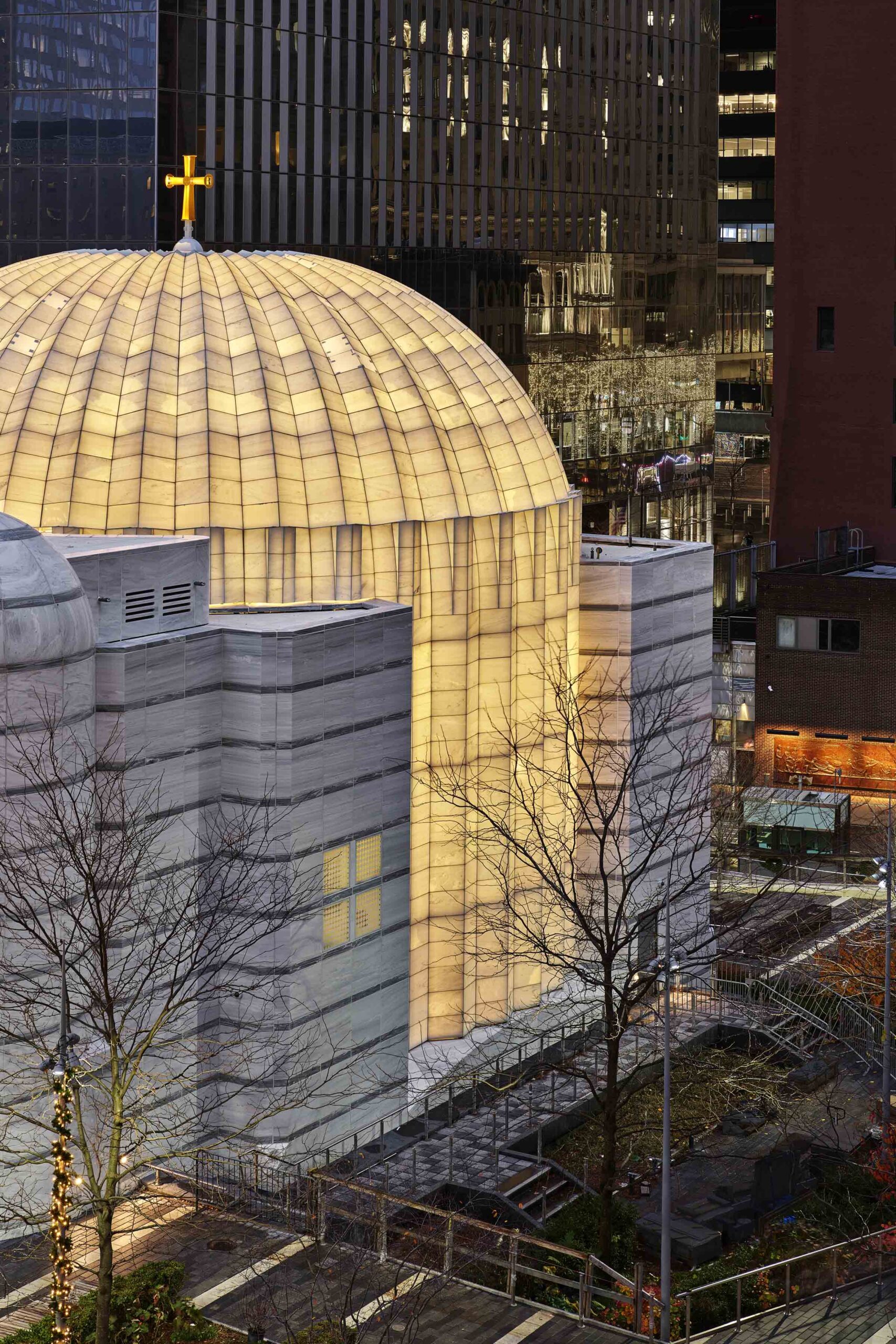 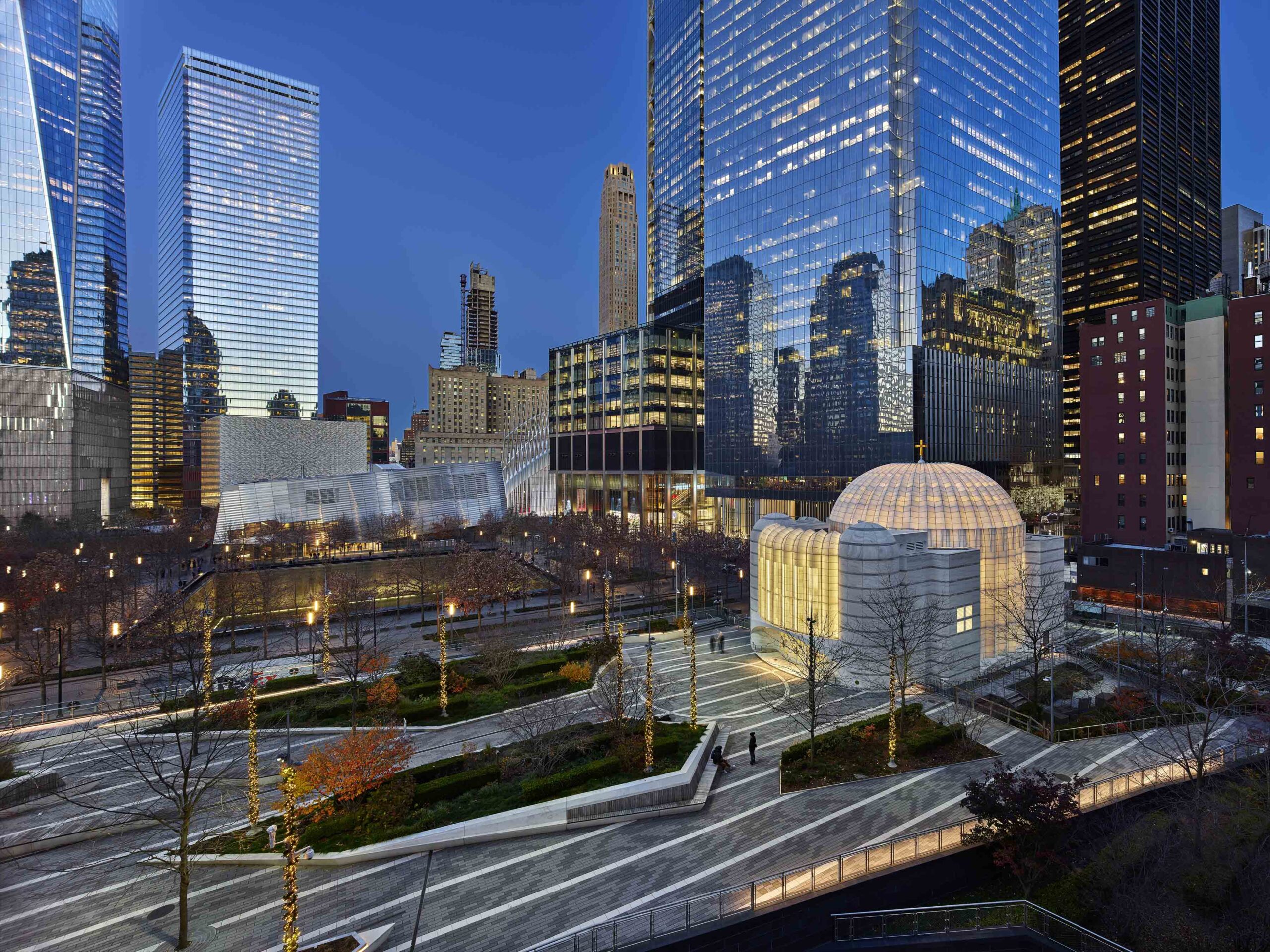 The Church was the only religious structure to be destroyed on 9/11; now it becomes a National Shrine at the World Trade Center site

“To see the St. Nicholas Greek Orthodox Church and National Shrine finally open is emblematic of Lower Manhattan’s storied future and defining past,” said Santiago Calatrava, Architect of the newly rebuilt St. Nicholas Greek Orthodox Church and National Shrine. “I hope to see this structure serve its purpose as a sanctuary for worship but also as a place for reflection on what the city endured and how it is moving forward. Architecture can have an intrinsic symbolic value, which is not written or expressed in a specific way but in an abstract and synthetic manner, sending a message and thus leaving a lasting legacy. Thank you to the Port Authority of New York and New Jersey, the Greek Orthodox Archdiocese of America, the Friends of St. Nicholas and the WTC Memorial Museum for their fervent support throughout the course of reconstruction and for believing in my architectural vision.”

Calatrava’s design for St. Nicholas Church was heavily influenced by Byzantine architecture and landmarks, specifically a mosaic in Hagia Sophia, the Virgin Mary as the “Throne of Wisdom.” In a series of watercolors, Santiago Calatrava symbolizes a metamorphosis from that mosaic into the facade of St. Nicholas. The Hagia Sophia-inspired dome features 40 windows and 40 ‘ribs’– the same number of ribs in Saint Nicholas, which are visible from both the interior and the external subdivision of the roof. The dome features twenty prophets whose images alternate between the dome ribs. The architectural elements incorporated into the structure are based on an in-depth study of the relationship between Byzantine architecture and numbers.

The entire exterior of the structure was intentionally made of Pentelic marble to parallel the Pentelic marble that makes up the Parthenon in Athens. The dome is made of thin stone and glass laminated panels that are illuminated from behind. When illuminated, these areas of the façade create an incandescent aura that makes the entire church appear to glow from within, invoking the feeling of being a beacon of hope amid the night. The exterior of the church consists of four solid stone-clad towers that ultimately form a square shape, which hosts the dome-like building. The corner towers and two west-facing towers are clad in alternating large and small horizontal bands of white and gray marble reminiscent of the Church of the Holy Savior in Chora, Turkey.

In St. Nicholas, due to the scale of the church, the Narthex forms a single continuous space. The arch forms a sheltered Porticus approximately eight feet deep in front of the entry doors that open onto the Exonarthex (opposite the church’s main Altar). From there, the church moves through a series of liturgical spaces including the Narthex, and into the Nave (main Altar) of the church, eventually landing at the Iconostasis and Sanctuary.

Entry into the main Altar is through the “Royal Doors” – a pair of doors depicting the Annunciation. Taking inspiration from the Church of the Rotunda in Salonica and the Hagia Sophia as models, the main Altar of the church lies under the all-embracing span of a central dome; at the center of which is the Image of Christ (Pantocrator), Ruler of the Universe, surrounded by twenty Old Testament Prophets.

The north and south axial recesses, or niches, are marked with translucent arched windows divided by mullions forming a cross. Icons and offertory tables accent the niches. The eastern recess eliminates the arch window so that the iconography above the main Altar can be seen as a singular image.

The Iconostasis stretches across the east end of the Nave in order to encompass the full breadth of view that a parishioner or visitor may have upon entering. Circular candle rooms are located laterally to the main entrance area. Beyond the Iconostasis is the Sanctuary housing the Altar, whose access is reserved to only clergy and appointed persons.

The traditional iconographic program of the Shrine was fixed by Bishop Joachim of Amissos, a world- renowned scholar on Byzantine iconography, and the actual painting was executed by a priest-monk from the Monastery of Xenonphontos on Mt. Athos, the monastic republic in Greece over 1,000 years old. Father Loukas brought a subdued style to his iteration of the “Hagiographic School” of the 14th Century. Most of the icons were painted on Mt. Athos and brought to New York for installation by the monk.

Calatrava collaborated with DLR Group on the lighting design for St. Nicholas Church to allow the church to read as solid stone by day, and then glow “by the light of 10,000 candles” at night while also carefully balancing supplemental lighting with the ever-changing natural light within the church interior.

The church is situated approximately twenty-five feet above street level, which raises it slightly above the canopy of the World Trade Center Memorial oak trees. Shroud in stone, it is entirely fitting that the church, the only non-secular building on the reconstructed site, occupy this raised position. As such, it will serve as a spiritual beacon of hope and rebirth for the congregation and the city through the millions of visitors meant to pass through the reconstructed World Trade Center campus.

A large open plaza on the west side leads visitors to the entrance of the church through a low arch spanning between the round stair towers on the west façade. The two non-liturgical spaces housed in the portion of the building west of the dome on the second and third floors are the Community rooms. Two small offices on this level have windows to allow views of the Memorial and Liberty Park. The large Meeting Room is an additional space open to the local community for meetings and other activities. These spaces are a significant component of the building’s program as they accentuate the church’s open and welcoming relationship with the greater World Trade Center Memorial site as well as the community of Lower Manhattan.

“This Shrine will be a place for everyone who comes to the Sacred Ground at the World Trade Center, a place for them to imagine and envision a world where mercy is inevitable, reconciliation is desirable, and forgiveness is possible,” said His Eminence Archbishop Elpidophoros of America. “We will stand here for the centuries to come, as a light on the hill, a shining beacon to the world of what is possible in the human spirit, if we will only allow our light to shine before all people, as the light of this Shrine for the Nation will illuminate every night sky to come in our magnificent City.”

St. Nicholas Greek Orthodox Church and National Shrine is the culmination of Calatrava-designed projects at the World Trade Center Campus, joining the WTC Transportation Hub – commonly known as “the Oculus” which opened to the public in 2016. Envisioned by Santiago Calatrava to symbolize a dove released from a child’s hand, the Oculus is situated at an angle in contrast to neighboring buildings and even the entire grid of the city, thereby allowing the light to shine directly overhead. The downtown architectural landmark has become one of the most photographed structures ever, responsible for bringing in tourists and helping reenergize the lower Manhattan area.

About Santiago Calatrava
Born in the Spanish city of Valencia, Santiago Calatrava is an architect, civil engineer, painter and sculptor. After completing his studies in Civil Engineering at the Federal Institute of Technology in Zurich, he opened his first office in Zurich in 1981, where it remains as the firm’s headquarters with offices in New York and Dubai. His most recent projects include a new commercial office building at the Stadelhofen Railway Station in Zurich, which will include parking for nearly 1,000 bicycles, the Cosenza Bridge in Italy, World Trade Center Transportation Hub in New York, the record-breaking Dubai Tower, and the UAE Pavilion and Qatar Pavilion for Expo 2020 in Dubai.