How does Makoto Tanijiri ( co-director of SUPPOSE DESIGN OFFICE), who has created sophisticated spaces in various fields including homes, hotels, and commercial facilities, perceive the relationship between homes and beauty?

Also, as Tanijiri foresees an era in which office and private life are no longer separated, how can technology support us while staying close to space?

We asked him about the beautiful spaces that can be realized with Amazon Echo “Alexa” through the latest case study designed by SUPPOSE DESIGN OFFICE.

■ Contemporary living space with the essence of Japanese style

SUPPOSE DESIGN OFFICE’s latest case study, “House in Gotanda,” is located in a condominium in a quiet residential area in the center of Tokyo.
The unit formerly occupied by the owner when completing the condominium has a unique shape: a maisonette style with a partial atrium on the upper and lower floors and an inner garden.

In renovating this space, Tanijiri made the lower floor into a continuous space and adjusted the space level so that it seems as if a courtyard had been pulled into the center.
He designed the east and west sides of the building with the idea of creating a Japanese-style seating area that rises like a veranda.

Tanijiri describes the overall concept as follows. “The kitchen in the center has a low ceiling height, purposely contrasting with the two atriums. As a fashion designer, my client owns many of the artist’s tableware and other items, so I aimed to create a space that would complement their work. While space has a modern feel to it, we tried to capture the essence of Japanese style with elements such as low ceilings and a small rise.” 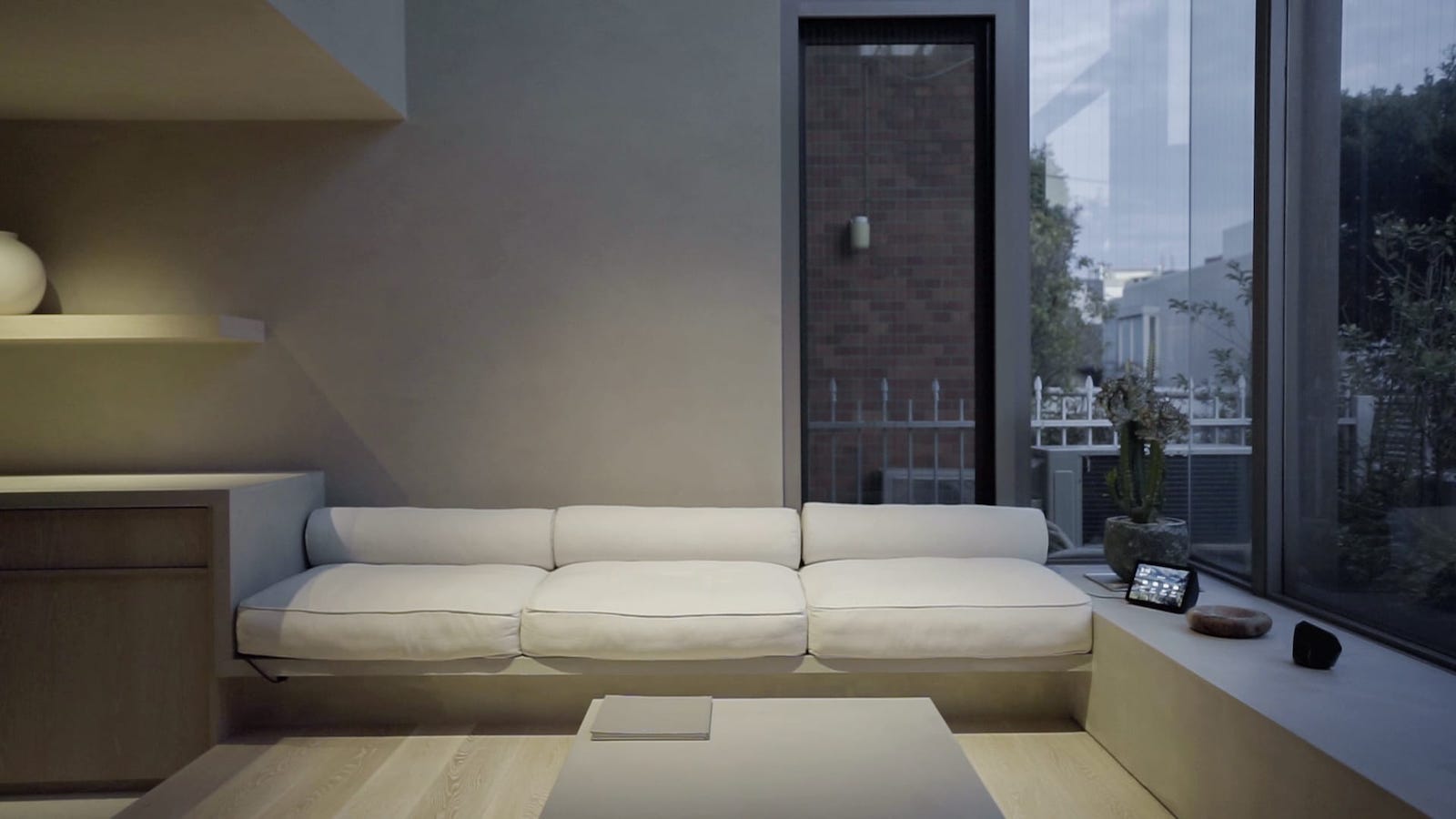 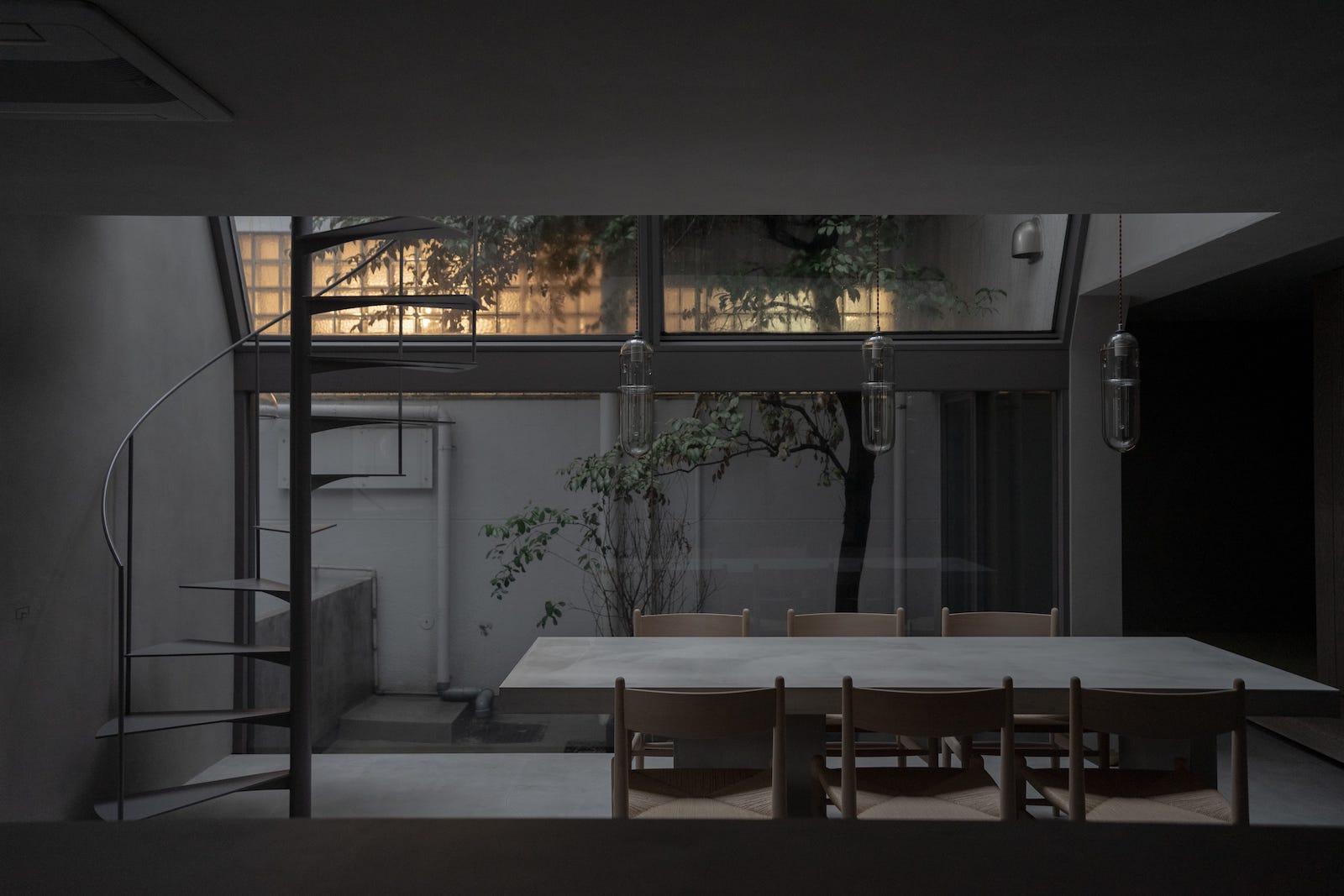 ■ Narrow down the material to emphasize and abstract

The interior of “House in Gotanda” is clean, but it doesn’t make people nervous, but rather relaxing.

Tanijiri, who has worked on more than 150 houses to date, listed the characteristics of so-called modern spaces and explained: “I think modern architecture is basically about reducing the number of lines and abstracting space. Such an abstracted space can feel a bit cold, but we want it to be warm and inviting as a place for living.
Rather than reducing the number of lines in this house, we tried to create abstraction by minimizing the materials and keeping the materials intact.”

Tanijiri points out that one of the key points of abstraction was handling the parts used to operate the equipment, such as the electrical outlets and switches that appear on the walls. Tanijiri says, “Kitchen counters and tables are relatively low. If you have many things above that height, it can look a bit cluttered when it’s finished. So in our office, we set up the electrical outlets at a low level, and the switches are about 90 centimeters from the floor.
So, in our office, we have the outlets low. The switches are about 90 centimeters below the floor, and we’ve also switched to stick-type toggle switches without the plates.
We try to reduce the space’s noise by making it almost invisible from a distance, even though it’s out in the area.” 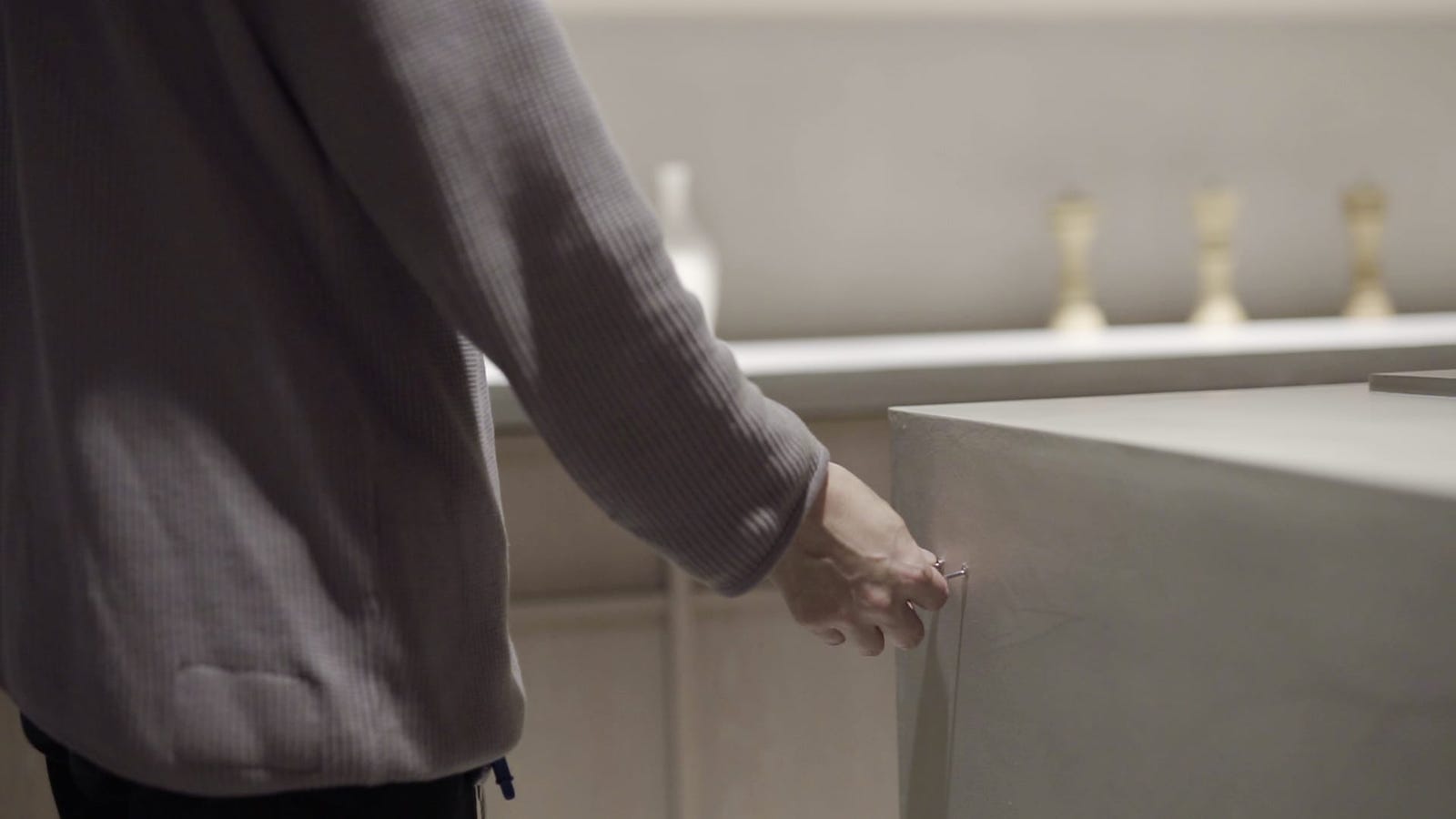 ■ Technology that fulfills the function of beauty

Tanijiri speaks of the beauty that comes from abstraction with high texture as “a kind of function,” he says.
Usually, when you think of a house, there are many functional requirements, such as short lines of movement and a lot of storage space. But I believe beauty is also a function in that it enriches people’s feelings and creates a mentality that makes them want to keep it clean.”

In that respect, Amazon Echo, which allows you to control various devices, such as lights and air conditioners, by simply saying “Alexa,” is the appropriate device for creating beautiful spaces.
It’s a simple, unobtrusive device that connects various functions without a control panel or remote control attached to the wall.

”When I choose a device, I focus on its design,” says Tanijiri. “Of course, ease of use is important, but it’s also important that you don’t want the device to be in the space where you don’t want it to be. Amazon Echo doesn’t have a distinctive color, and it blends in easily with space; I think that’s very important.” 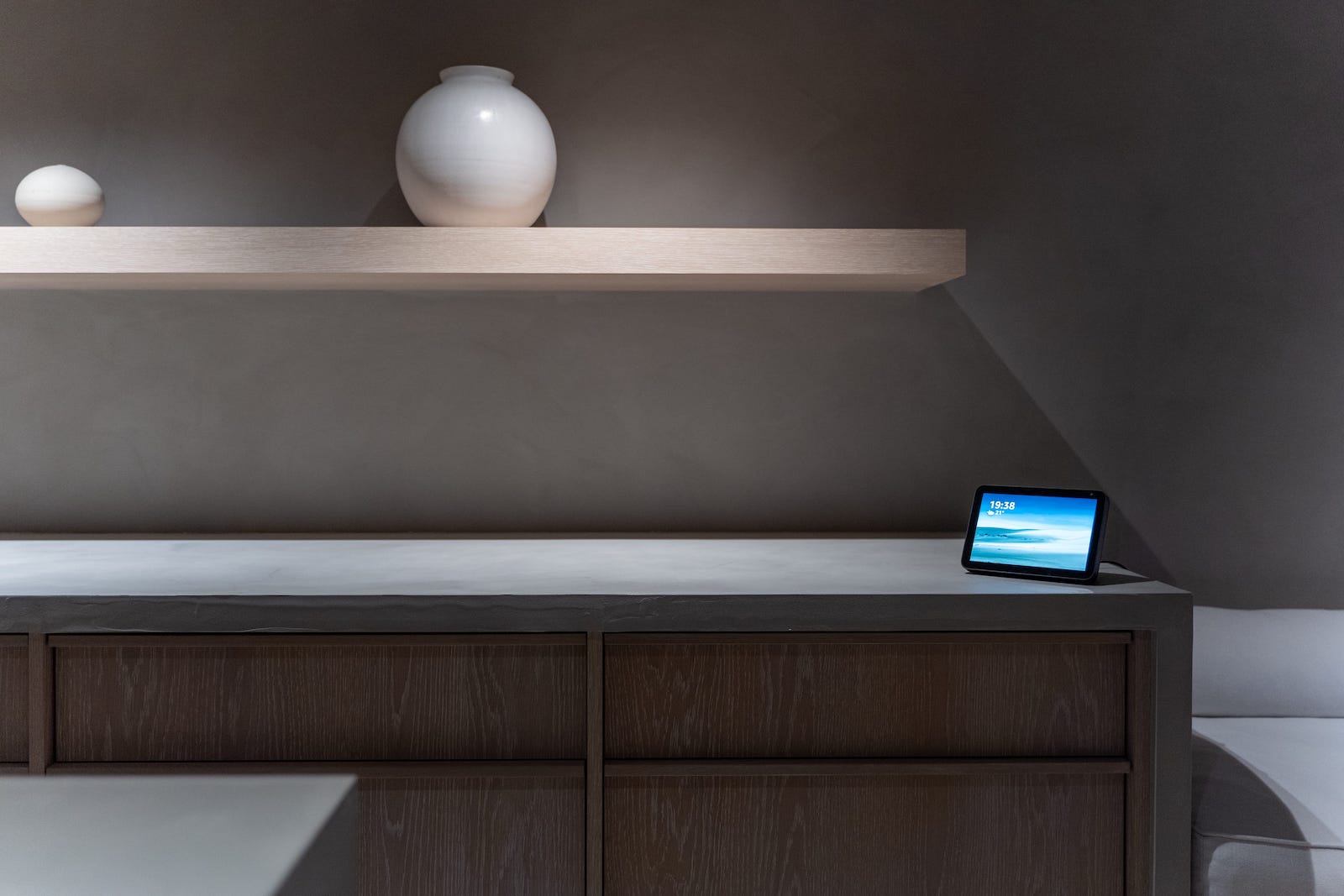 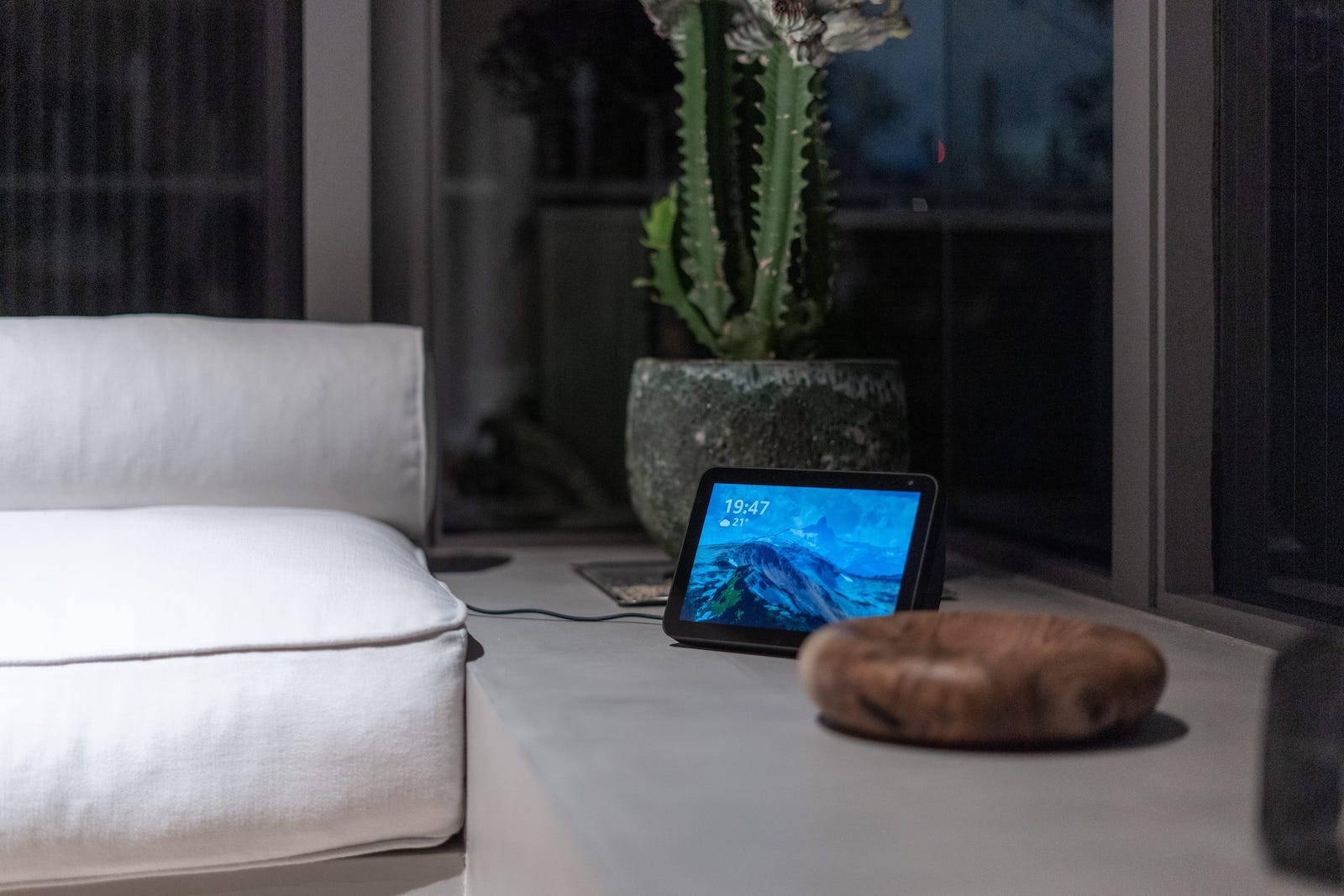 ■ A device that can realize a smart home even afterward

Mr. Tanijiri also has high hopes for the Amazon Echo, noting how easy it is to implement.
Tanijiri says, “I had a preconceived notion that a smart home would have to be carefully planned and built into the building from the design stage. But I was surprised to find out that Alexa is like an application added to the house later to update the smart home.
Before you had to have a control panel to listen to music, remote control for air conditioning and a switch for lighting, and so on, but with Alexa, I think it’s possible to integrate all these functions into one.”

Alexa’s ability to consolidate and integrate various functions is in line with the ‘era of cohabitation’ that Tanijiri has been advocating in recent years.
For example, living together means living in a place where you can work and live together without being separated. It’s the same with “Shashoku-do” where our office is located. Still, I thought that places to eat and places to work didn’t have to be separated and that in this day and age we’re seeing more and more people living together, and I think an entity like Alexa can promote this trend.”

Technology can enhance materials by eliminating elements that are inherently unnecessary in space, and achieve a function of beauty.
The Amazon Echo, a device that fits in with the age of cohabitation and makes the smart home easy to use, will be a great partner in helping us create beautiful, comfortable spaces.
【 】 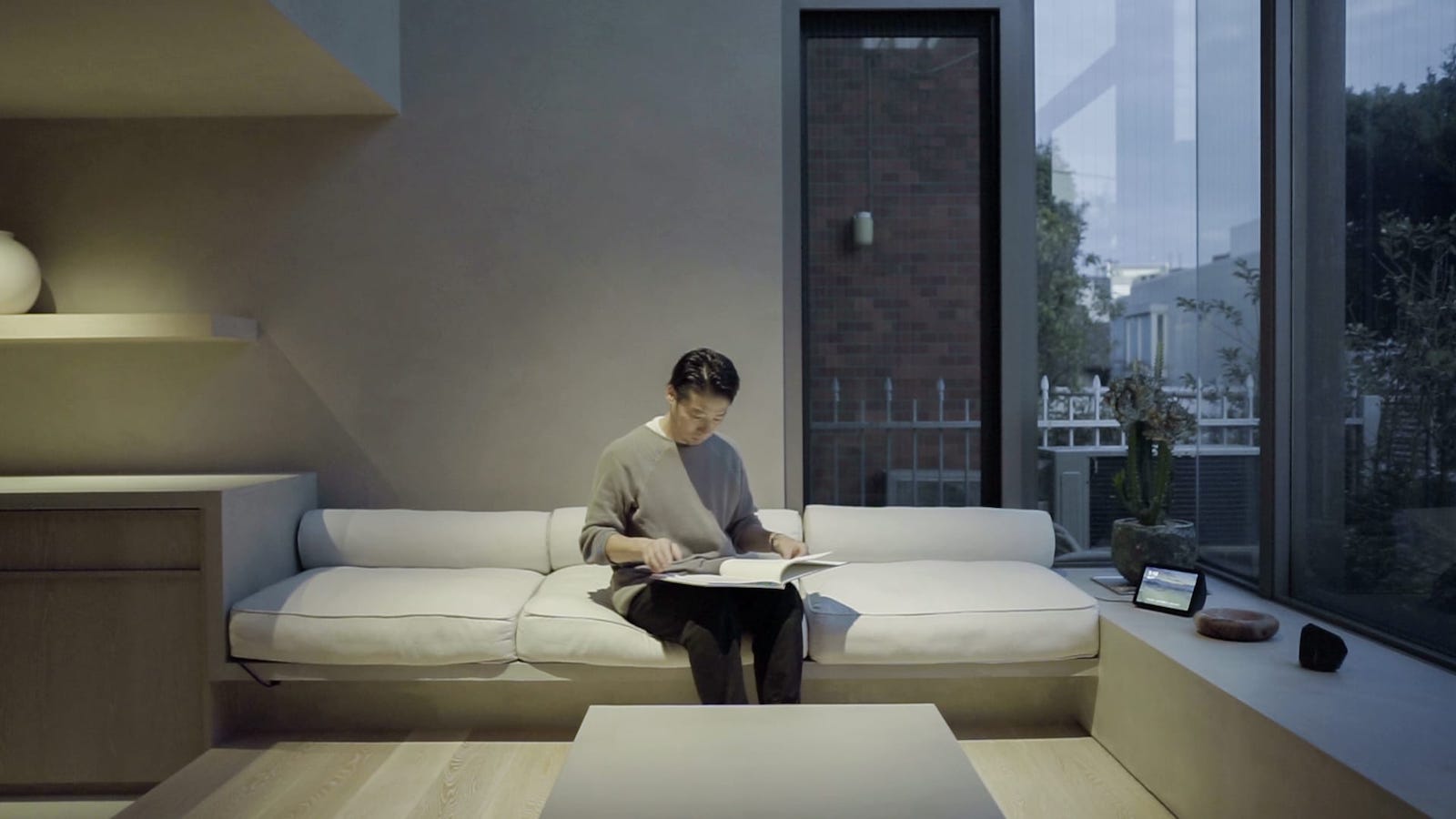 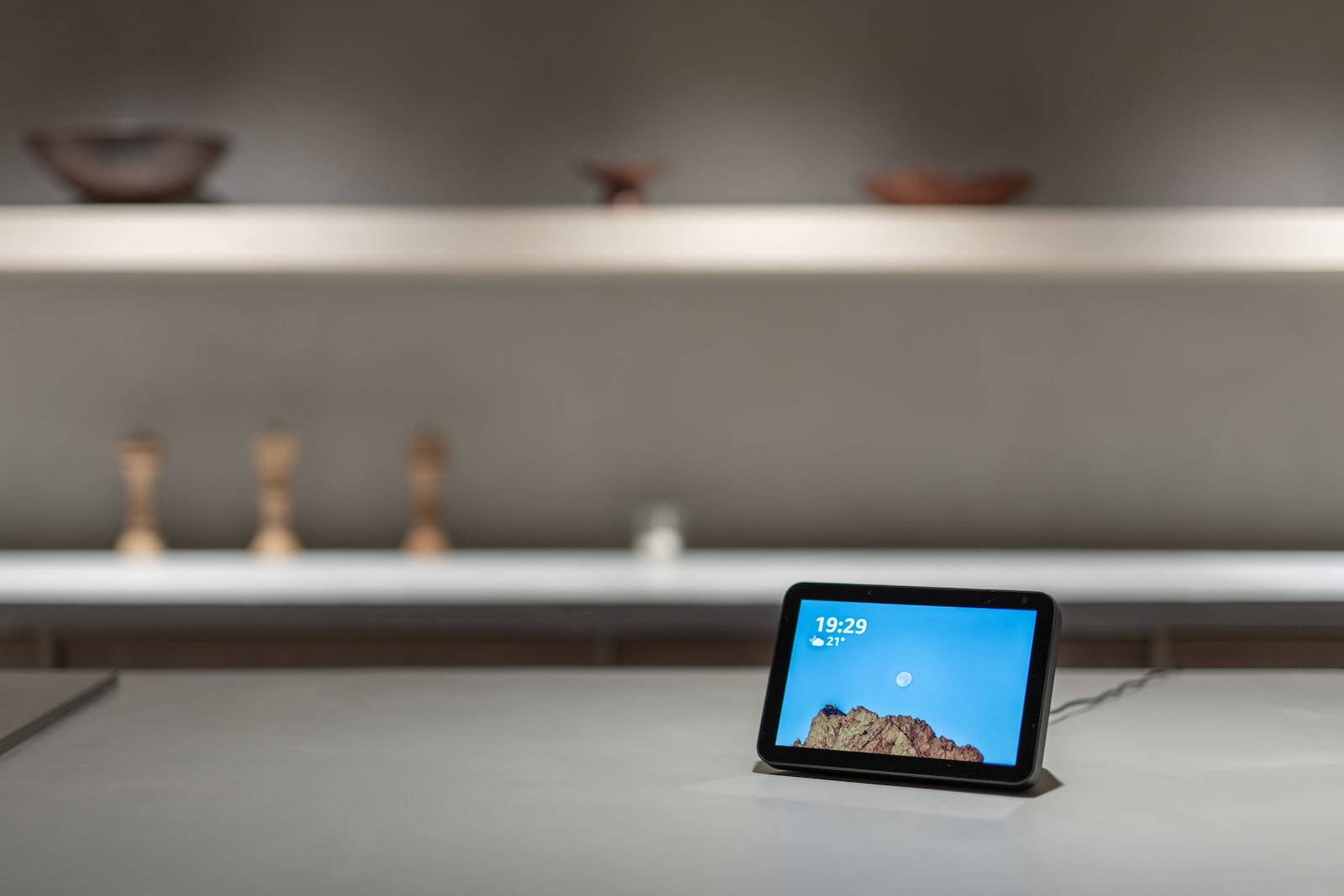 Equipped with an 8-inch HD screen and high-quality stereo speakers.
By simply talking to Alexa, you can see the information you need at a glance, and in addition to voice control of Alexa-enabled smart home devices, you can also manage them on the screen.
You can easily realize a smart home by talking to Alexa and turning on the lights in the room, operating the air conditioner and TV. * 1

谷尻 誠
1974年広島生まれ。2000年、建築設計事務所SUPPOSE DESIGN OFFICE設立。2014年より吉田 愛と共同主宰。広島・東京の2カ所を拠点とし、インテリアから住宅、複合施設まで国内外合わせ多数のプロジェクトを手がける傍ら、穴吹デザイン専門学校特任講師、広島女学院大学客員教授、大阪芸術大学准教授なども勤める。近年「BIRD BATH & KIOSK」のほか、「社食堂」や「絶景不動産」「21世紀工務店」「tecture」「CAMP.TECTS」「社外取締役」「toha」をはじめとする多分野で開業、活動の幅も広がっている。
Makoto Tanijiri
Born in Hiroshima in 1974. Established SUPPOSE DESIGN OFFICE in 2000. Co-founder, director with Ai Yoshida since 2014. Based in two locations, Hiroshima and Tokyo, he has worked on numerous projects in Japan and overseas, from interiors to housing and complex facilities, while also working as a specially appointed lecturer at Anabuki Design College, a visiting professor at Hiroshima Jogakuin University, and an associate professor at Osaka University of Arts. In recent years, in addition to "BIRD BATH & KIOSK", he has opened and activities in various fields such as "Sha-Shokudo", "Vantage Point Properties", "Twenty-first century constructions", "tecture", "CAMP.TECTS", "Outside Director" and "toha".