Could you introduce the background and characteristics that shaped the architecture?

Masahiro: “Roadside Station in Mashiko” is a roadside station, so there are many uses for what’s inside. There will be places to sell crops produce, places to sell processed goods, restaurants, conferences, offices, migration support centers, galleries, and halls.
Usually, we would call in a management professional and take care of the entire operation. As I mentioned earlier, the whole roadside station is managed by the people of the town.

We had to create a system of planning methods that could accommodate the fact that each space in the building was getting bigger or smaller, moving from one direction to the other, and so on.

We also had a broader goal of “building a town.”
Usually, the purpose of a roadside station is to sell products to tourists from outside the town.
But with “Roadside Station in Mashiko,” there were no supermarkets or post offices around, so we decided to turn it into a facility for the people who live in the town.
In other words, both outward-facing and inward-facing faces were in demand.

The town of Mashiko is the site of the activities of Shoji Hamada, a potter who led the folk art movement, and is also a place where local studies are active.
They wanted to build a roadside station as the culmination of their efforts.
That’s why we always wanted to create an architecture that confirmed Mashiko-ness, in the same way, that we can understand local life by looking at folk art.

One of the main reasons for this was that Mashiko has the basic structure of the countryside surrounded by Satoyama (mountains), so I thought it would be a good idea to build buildings in this landscape. 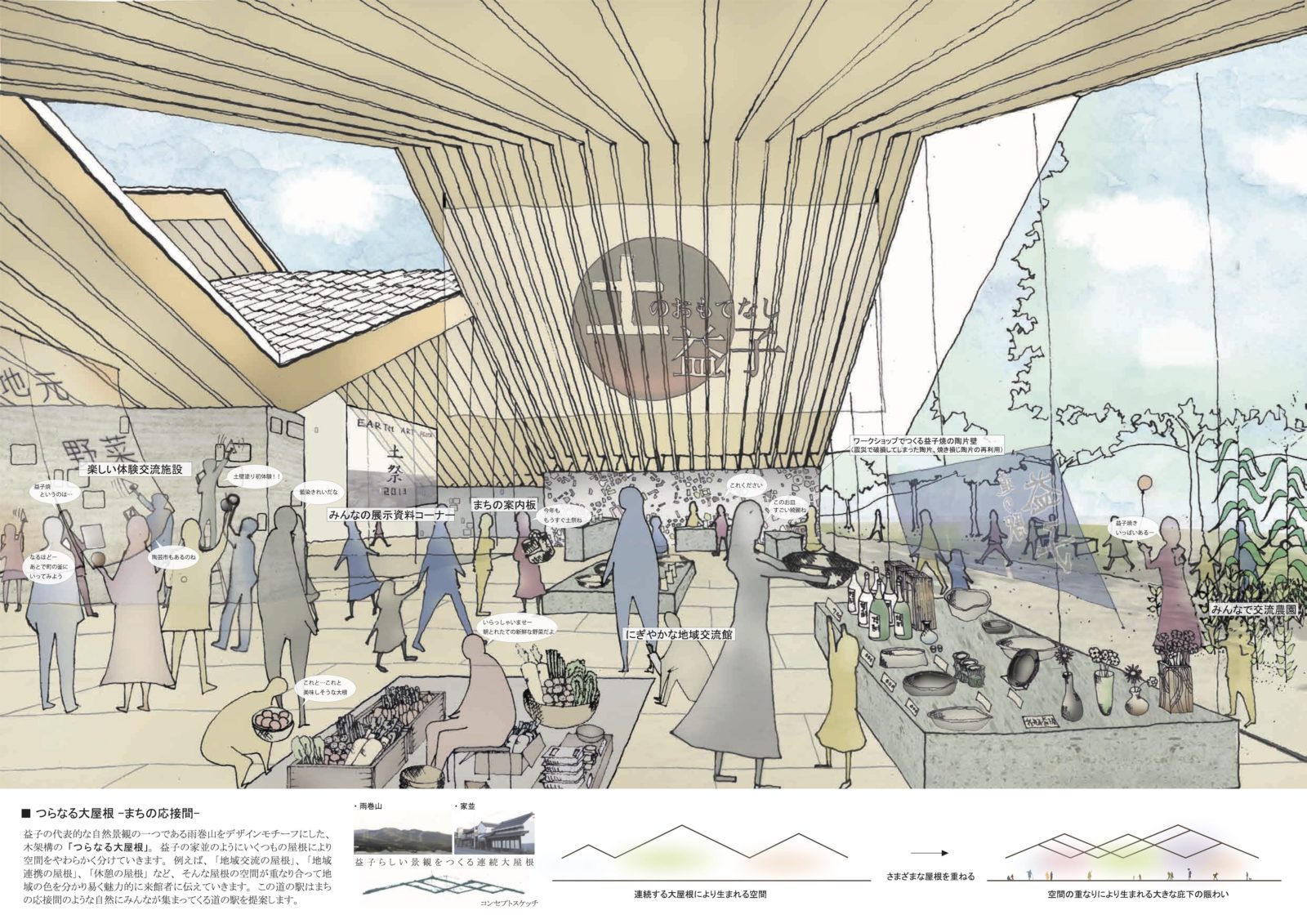 プロポーザル時のパネル。「益子らしい風景をつくる連続大屋根」を提案 | Panel at the time of the proposal. Proposal for a large continuous roof that creates a typical Mashiko landscape Provided by MOUNT FUJI ARCHITECTS STUDIO

The mountain-like roof is one of the features of “Roadside Station in Mashiko.”

Also, we decided to bring not only the shape but also the materials from the woodland where we can see them.
Eighty percent of the wood beams are made from trees from the town. The remaining 20% is also from the same Tochigi prefecture.
The shapes and the materials, we thought we would bring them all from the landscape.

The use of local wood is a common practice these days, isn’t it?

Masahiro: But it’s not always easy to use locally grown wood.
If you decide on a construction company and then do the logging, drying, and assembling, you won’t be able to meet the construction deadline.
After the competition, but before the basic design is put together, we need to start cutting and processing the laminated wood.

That way, even if the size of the space changes, you can still use the material you cut out.

There were even better things to do with this method. Regardless of space’s size and span, if the cross-section of the beam is kept constant, the details will not change. 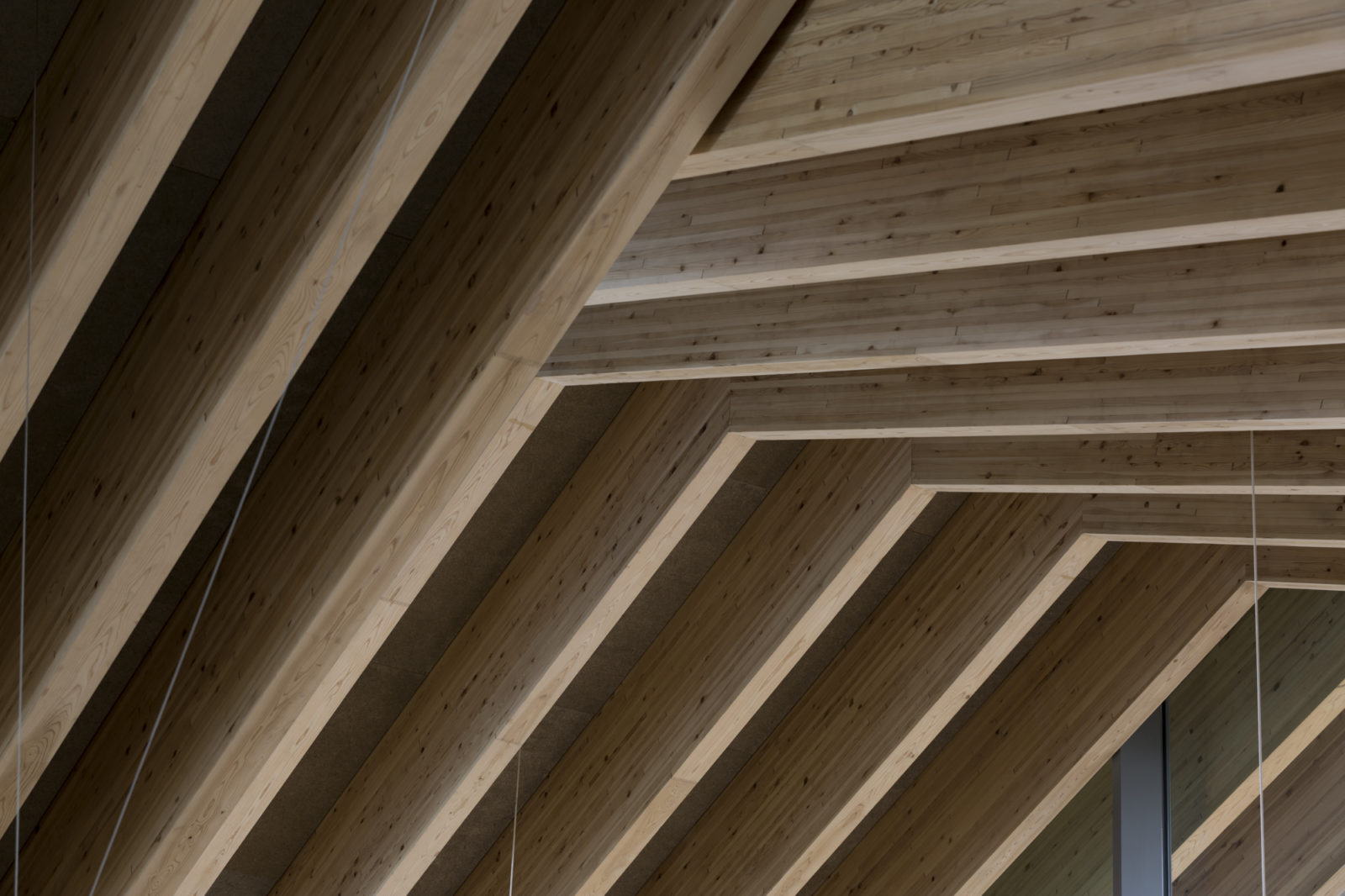 The span moved until about two months before the implementation design was completed.
Because of this process, I think everyone’s opinions were well taken into account, and they thought, “I built this building,” and “It’s my building.

Another feature is that Mashiko’s lifestyle, whether pottery or rice paddies, is closely linked to the soil, which is why the buildings are made from it.
The substructure from the floor to the wall was made by plastering with Mashiko’s soil.

We decided on the condition of the plastering while following the shape and finish of the buildings near the mountain called Behar huts (note: tobacco drying huts).
And so, on top of a substructure that looks like the land has risen, you have a building that looks like a mountain range with a roof on top.

The landscape, too, isn’t a landscape that has stopped. There was forestry, there was agriculture, there were carpentry and plastering, so you wanted to take on a landscape that included the activities of the people. With that in mind, we came to that format.

The landscape, the people, the materials, it’s a system that everyone can participate in, so it’s a very open-ended architecture. 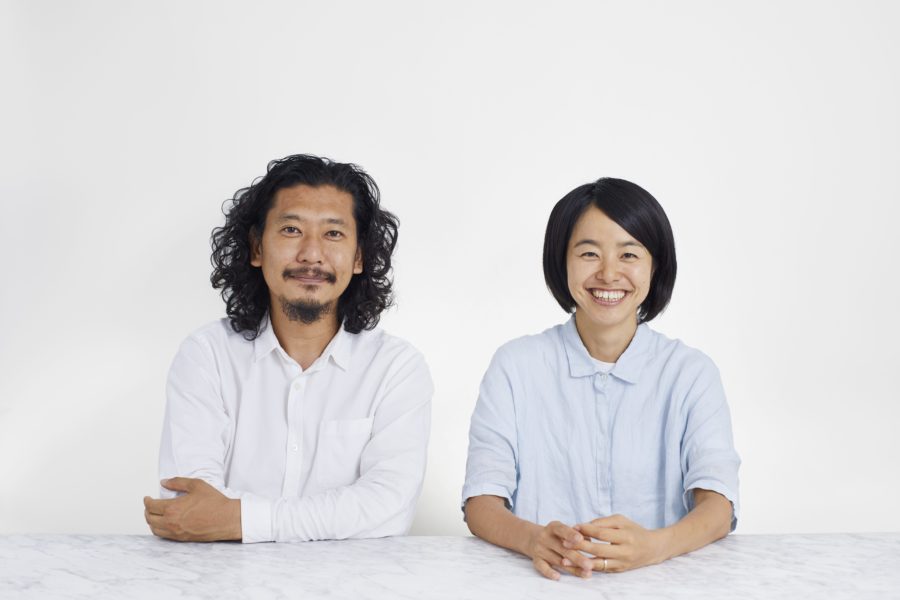