Ryuhan Ogasawara, an architecture student who posted a photo on Twitter while on a “round-the-world architecture trip” from 2019-2020, caused a tremendous response.
In the second half of the interview, which follows #01, we asked him about his interactions with real people, how he’s changed his mind since returning home, and what he’s currently working on.
He said he returned from a trip on Twitter where he was passing the seeds and began giving him the buds. What exactly does that mean?

(Continued from #01)
Twitter was basically posting in Japanese.
The people I met abroad were mainly on Instagram, and I was often willing to exchange usernames with people I met on my travels, so I would sign up for Instagram and comment in English.
I wasn’t particularly homesick or anything like that. But when I’ve had problems with theft or other problems, for example, I’ve received encouraging comments on Twitter. It flowed in Japanese and that comment helped me a lot.
I have also been allowed to stay at the home of an exchange student from Japan who I connected with through Twitter.
He had studied architecture in Florence and it was good to spend time talking to him about things, as it was just Christmas time and there was nothing to do at that time of year.
Meeting people is still an asset, isn’t it?

クリスマス前をモンペリエの家でホストの家族とともに過ごし（左）、新年をローマでシンガポール人旅行者と迎える（右）| Spending the pre-Christmas period with the host's family in their home in Montpellier (left) and welcoming the New Year with a Singaporean visitor in Rome (right) All photographs: Ryuhan

Airbnb is the main inn

For lodging, I was using Airbnb to get around. In case of an emergency, book a hotel at “booking.com”.
There was a strike when I was going from Lyon, France to Montpellier and the trains didn’t move.
I was planning to Airbnb at L’Arbre blanc, an apartment complex designed by Sou Fujimoto in Montpellier, but my schedule didn’t work out.
But my host treated me well and I was able to shift my dates to stay there.

I was definitely going to visit the Greek Acropolis, so I crossed over to Greece from Italy. I toured Spain and Portugal, where my 90-day visa-free stay in Europe ended. I moved to the United States.
The U.S. came in from Boston and traveled up the East Coast to New York, Philadelphia, Chicago, and then flew to the West Coast.
The West Coast is San Francisco, Los Angeles and San Diego, and then the Salk Institute. 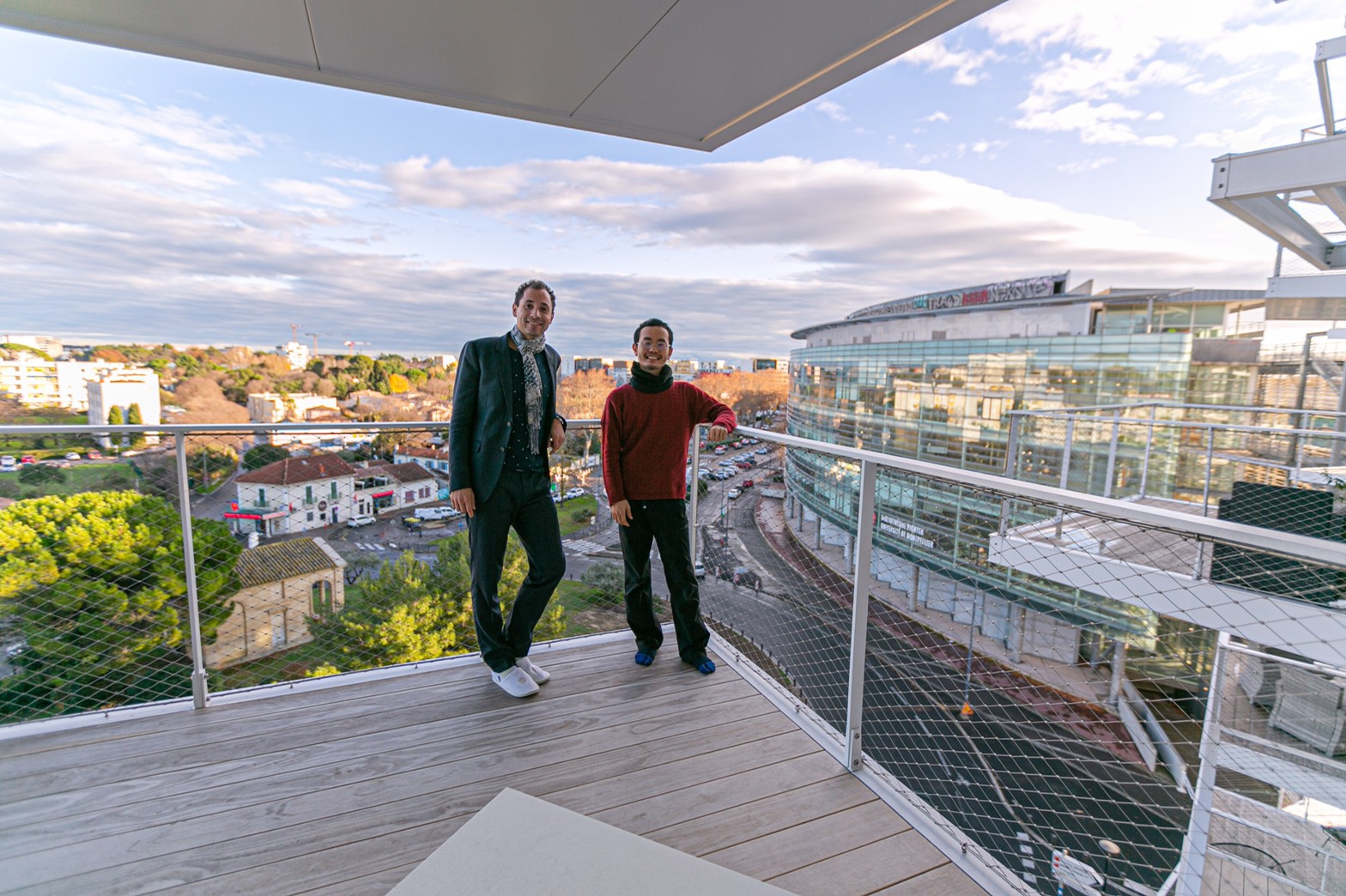 I spent two full days at the Salk Institute from morning to night.
The view on the evening of the first day was especially great. The cloudy skies cleared and the sun was setting. The institute staff came out one by one, saying they had never seen such a beautiful sky.
The next day was clear and sunny, with no clouds at all. The time spent there seemed like an eternity.
I was very emotional about what we’ve been trying to achieve so far, and it brought tears to my eyes. It was a fitting climax to the experience.

I returned home at the beginning of February, but the topic of Corona came up in January, and it was just in time.
When I returned home, I clasped my hands to the Buddha and reported that I had returned safely. So the purpose of the trip has been accomplished. 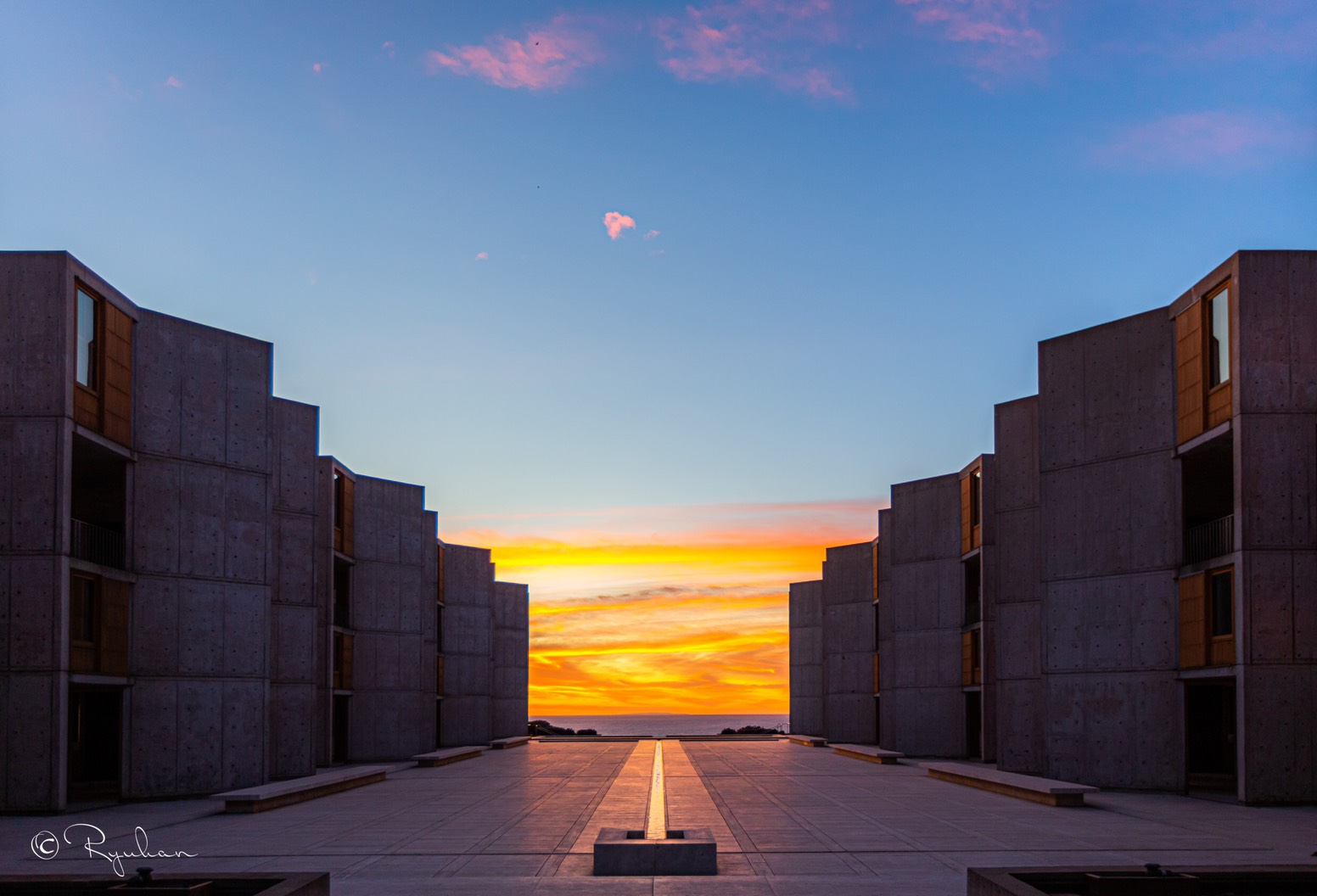 夕暮れを迎える〈ソーク研究所〉| The Salk Institute for Biological Studies at dusk

This time, I give the raised buds

Right now, I’m reflecting on my travels, uploading photos and writing on Twitter and Instagram.
Twitter during the trip was a timeline, but now it’s like looking back and seeing it relative to the experience of it all.
I tried to look at the parallelism and compare it, finding all sorts of common ground.
I think it allows us to look at what kind of architecture it was, in the abstract, rather than just putting the emotion into words.

I’m also retouching my own photos again. It’s not what you see, but what emotions I felt, the atmosphere, the understanding I gained. I’m going to include in the picture about.
Retouching is a profound thing. I think a little bit of manipulation can change your mind and convey your emotions.
For example, in the photo of the Resurrection Chapel in Finland, I retouched the light and spatiality that I saw.
In a way, I know this could be misunderstood or misspelled, but I’m hoping to make this post like I’m handing over a raised jar of woodpeckers this time.

What I can really share with others will be through becoming a designer and using what I have absorbed to create architecture.
I said at the beginning (#01) that this journey is an airstrip, a preparation for the journey, but I wanted to start the next one because I wanted to take off from here. 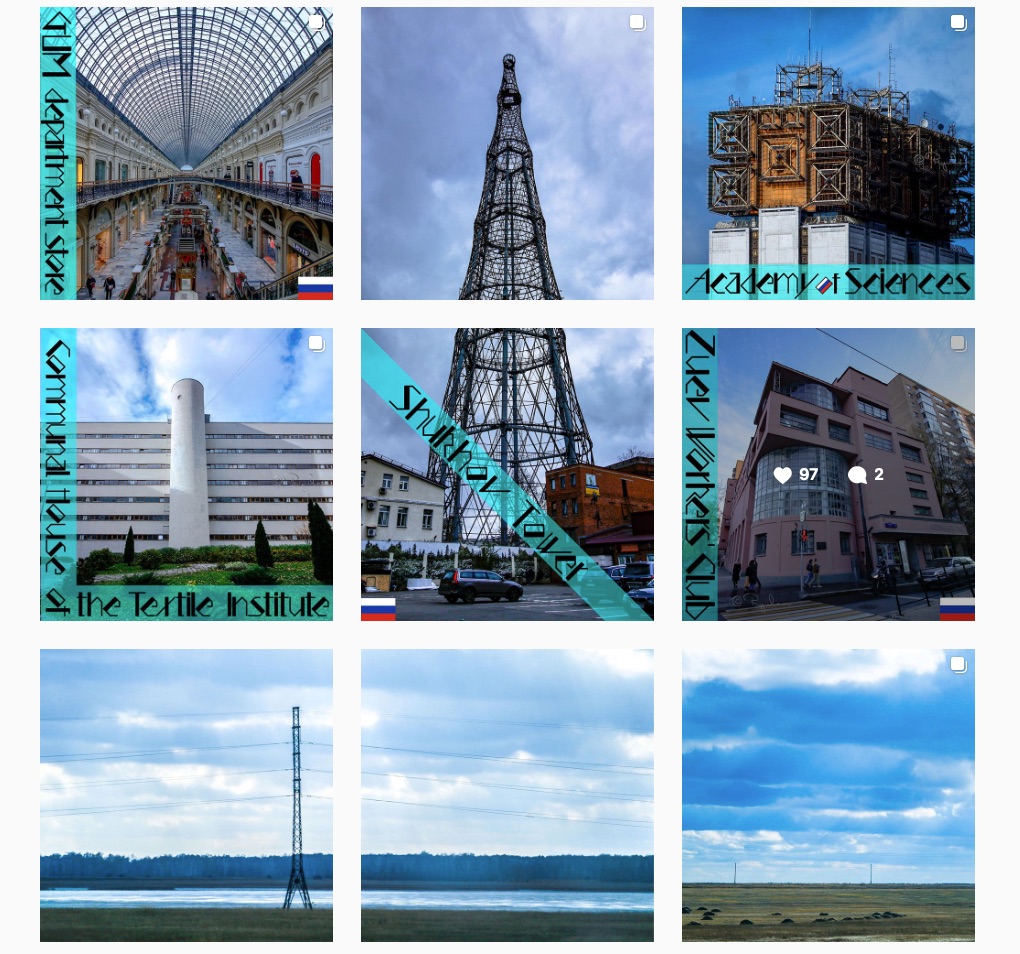 There are people in the world who are born in different environments and have diverse values.
At that point, it was interesting to see the kind of ambivalence that exists between us, where we have different values, but still feel the same way as we do.
Architecture is a way to access the physicality that is engraved in our DNA. I think this is a great encouragement to create architecture in a diverse world.

At the same time, I have a renewed interest in Japanese culture, wondering what is unique to Japan.
My immersion in Buddhism before I went to university can work both well and badly for architecture.
Particularly against the Buddhist idea that things are good as they are, architecture tries to move forward and change the hardware to make it better.
Religion and ideology are like changing the hardware by changing the software.
I had a lot of trouble with it because the process was reversed.
I would like to learn about various ideas and architecture, and give shape to my own values as a whole.

I am originally from a Buddhist background, but I am also interested in Shinto. So I’ve been researching the Ise Shrine and ethnography.
We have also set up an organization that makes proposals for city planning, and we have a base of operations in Ise that goes into the community.
At the same time, I’m also interested in technology, and I’ve been participating in research groups.

There is no limit to what you can see in architecture, but I feel like I’m chasing the limit of what I can see and what I can’t see.
When I thought about my current position in Japan after traveling around the world, I wanted to think about the originality of the region while finding a kind of identity in the world.

It’s hard to spend your life looking at all the architecture in the world. It’s interesting to struggle with the things we can’t see. I don’t know when I’m going to die, but I know that it’s important to know how much I can accelerate before I die I’m thinking. 【】
(2020.05.14 online)

In the following #03, Ryuhan will introduce his top 10 recommendations for architecture! 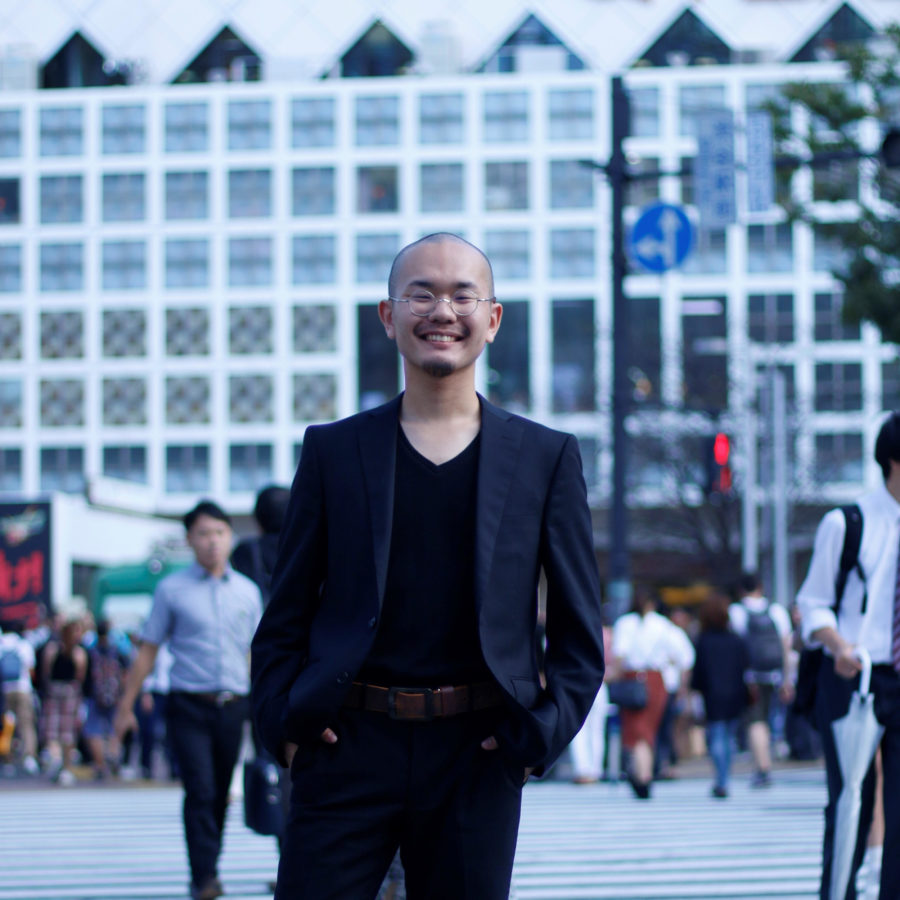 隆範
1998年愛知県生まれ。18歳で僧侶となり、建築学に打ち込む。茶道と建築を合わせたワークショップ『アーキテク茶会』や、プログラミングを使った禅と映像のインスタレーション『上善若水』、キビタキとシジュウカラのための『100の巣箱』など、建築の可能性を探求した幅広い制作を行う。日本建築学会主催『建築学生サミット2018秋』や、中部地方最大の建築学生団体『NAGOYA Archi Fes2019』を主導し、現在は地方都市のまちづくりを提案するチーム『まにまに』を率いている。
Ryuhan
Born in 1998 in Aichi Prefecture, Japan, he became a Buddhist monk at the age of 18 and devoted himself to studying architecture. A wide range of works that explore the possibilities of architecture, such as the workshop “Architecture Tea Party,” a workshop combining tea ceremony and architecture, “Jozen-Jakusui,” an installation of programming and Zen using programming, and “100 Nest Boxes” for the Japanese woodpecker and titmouse.
He led “the Architectural Student Summit 2018 Autumn” sponsored by the Architectural Institute of Japan and “the Nagoya Archi Fes 2019,” the most significant architectural student group in the Chubu region. He is currently leading the team “Manimani” that proposes town planning for local cities.