─ Can you tell us about the process and intentions of some of the projects that have grown in size and scope?

Mangyoku: The “International Dorm-City” was a project initiated by Kanagawa University, which has been promoting global education, including the School of Global Japanese Studies, to create a new international facility.
The theme of the competition at that time was “the nature of the exchange space.”

When we were thinking about a dormitory where 200 students could gather, we thought it would be better to create a fun environment where 200 people could come together to live together while having fun, rather than spending time alone, so that people could make contacts and formations freely.

It’s like a huge share house, but just because it’s a share house doesn’t mean you’re going to be sharing it with other people all year round, and I thought there’s a sense of “I want to be by myself, but I don’t want to be alone” in a shared living environment.

We set up what we call “pots,” where the landing and corridor are like balconies. We put furniture and sofas in there, changed the texture of the materials, and made it a place where we could do reports at the counter desk.
It’s a student dormitory, with lots of centripetal places through the atrium. It’s enclosed by a hip wall that you can sit on and cage in, so it’s like living in a three-dimensional space where you can see and hide in plain sight.

Here, I thought, “Isn’t there a place to learn in our daily lives as well?” I thought about this as much as possible. People from different cultures and backgrounds can learn about other cultures through cooking and playing together. Through architecture, we tried to expand the range of choices.

Mangyoku: The pot in the center of the house is treated like a living room and used for a purpose. If we use it as a staircase, we have to ensure the stairs’ width, so we can’t put furniture on it.

We also obtained ministerial approval for the Building Escape Safety Validation Method to make this atrium a reality. Still, we took the fixture way ahead of the standard design period to do so. 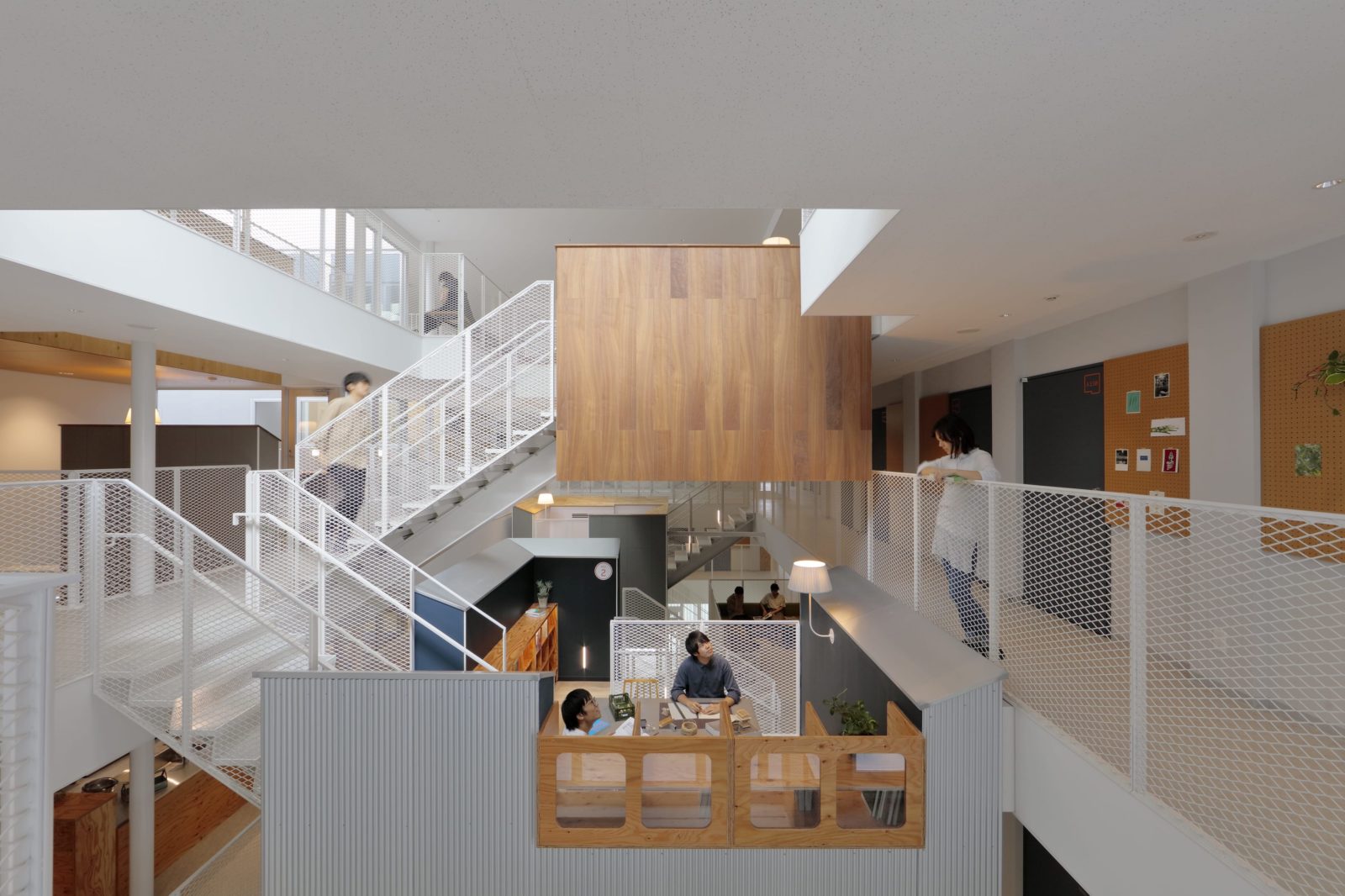 Nishida: 〈Scrap & Rebuild Project〉 is a place called “VIVISTOP,” which is like an after-school school, located in “Kashiwanoha T-SITE.”
Although most of the students are elementary school students, it is a space where they can use machine tools, make things like robotics, sewing machines, and many other things.

When we went to see the space, the staff said, “It’s a place where you can experience projects and techniques for making things, but it feels like space is imposed on you, and it’s just what adults think it should be.”
I wonder if children’s imaginations show up in the space as well? And I said, “That’s interesting,” and then we got a commission.

We’re from a design office, but instead of designing it ourselves, we asked the children to create the space the way they wanted to use cardboard.

First, we took out all the furniture in the space. We called it “field burning.” The children drew pictures of what they thought a desk of this size would be suitable for and what kind of place would be best, and then we made them out of cardboard to full capacity.

It took us about a month, but we started to make furniture one size fits all, and then we made a model by transferring the drawings. We would look at the models, break them down again with the kids, and then make another one out of cardboard.
When we said to the elementary school students, “Think about the public and private spaces,” they would think about it (laughs). I thought, “Wow!”

You don’t think about it in your head; you try it out and see if it’s necessary or not, and if you don’t think it’s usable, you stop and say, “Let’s make it again.”
It was a fantastic discovery that all the elements of space could be replaced, or rather, can be developed. Both the children and the staff were able to realize that, and I think it was a good thing that we were able to lower the hurdle in the creation process.

A temporary enclosure connects the timeline of the construction site

Nishida: This is an urban development project. When Nomura Real Estate was building the PROUD series of condominiums, there was an area covered by a temporary fence for about three years.
It was divided into three construction sections, and the construction was staggered, so it would take two to three years to complete. We decided to open the middle stage of the construction zone to the community for a limited period of about one year.

A temporary fence is an intimidating sight, and the moment the wall is removed, the people living in the area think, “Here comes the black ship!”
This used to be a dormitory for employees, and we opened it up to the community as a vacant lot while preserving the memories of that time and the natural terrain.
To make this a buffer or a common area, or preferably a central area on the time axis, we designed the program in terms of both how to set up the furniture and how to use it.

Specifically, we created a temporary enclosure with a place to run around, furniture of a size that could be moved, and other items of furniture that would be comfortable in the trees.
For the first time in less than a year, we decided to open the space for one or two weekdays and use it for small events on weekends.

We took on the weekday opening ondesign, but we just opened it up (laughs). We started by giving flyers to people who came and letting them know about the place.
Every day we recorded things like, “This person came,” and “An old man who was opposed to the project looked at me suspiciously,” After about six months, we started to visualize people’s movements.

Through repetition, some people started to ask if they could do something here. “I’d like to participate in a soup kitchen at a mom’s circle, is that OK? Or, “Can I make Harry Potter wands out of fallen branches?” (laughs).

We had a bonfire and a stargazing party on weekends, and we had some events, and then about six months later, we had a festival where a lot of people from the community came.

When PROUD is built, there will be an outdoor space, but it will belong to the community and the new residents.
We could manage the outdoor space and blend in with it by overlapping the timeline. I thought, “Construction site, that’s nice.” (laughs).

We realized that we could use the vacant space at the construction site even if it were only for one year.
In the beginning, I asked Nomura Real Estate, “If it’s only six months or one year, it won’t produce any results at all, is that OK?” I started by setting my expectations low, but many people came, and they were pleased (laughs). 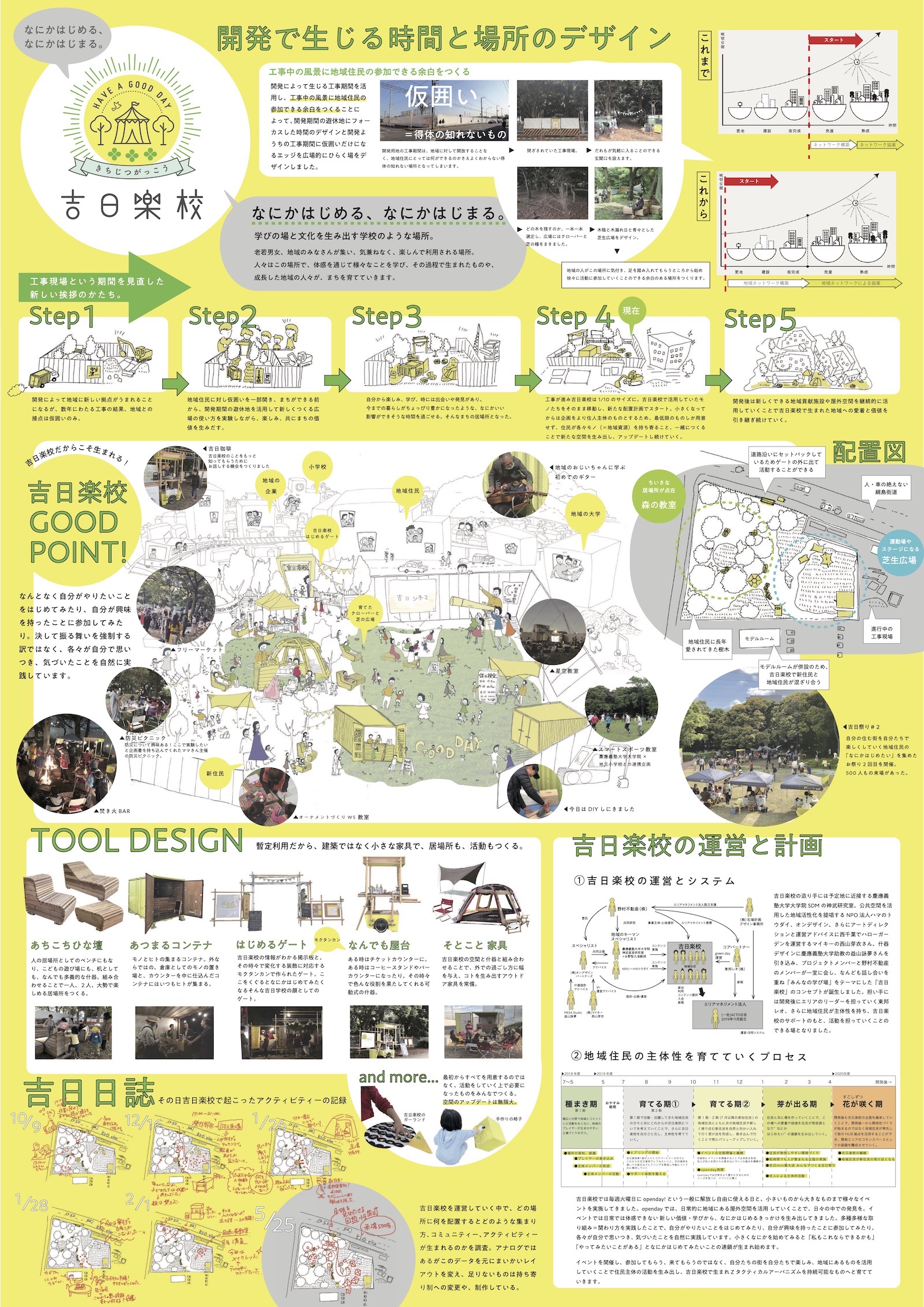 Propose an axis for the project rather than a finished product

── I’m sure you’ve been involved in the design process for a long time, which is similar to landscape design.

Mangyoku: The Kanagawa University dormitory communicates regularly with the students who are living there, and they communicate with us on Instagram to tell us how they are living, which I enjoy reading.

Our work at the dormitory is framed in the framework of design supervision, where we are asked to build a building, but at ondesign, we feel that they want to stay in touch with us even after construction is complete.

Each project has a timeline, so it’s not just a matter of designing and creating the building, but rather, we wanted to think about how the project should be done in a larger sense, and how we should propose it as a project.

Nishida: When a building is constructed, we are in a relationship with the client as the designer, and we want to discuss the project as if it were a single project, facing the same direction.
I want to be able to discuss these issues reasonably.

Rather than saying, “What do you think of this idea?” or “That sounds great,” “why don’t you think of something like this?” By proposing a new axis for the project, it would be great to come up with a sense of “Let’s make it this way” from each person’s perspective. 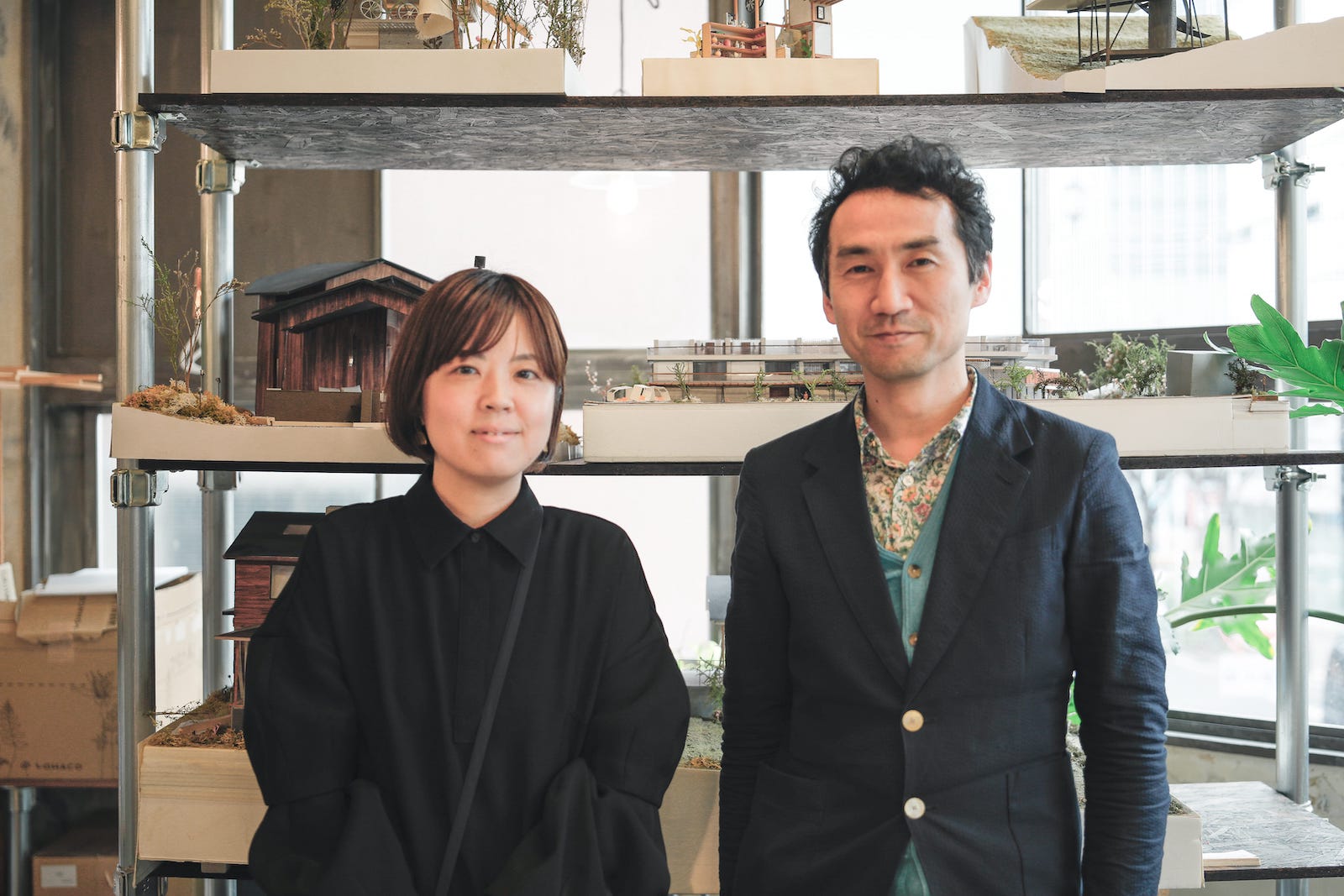